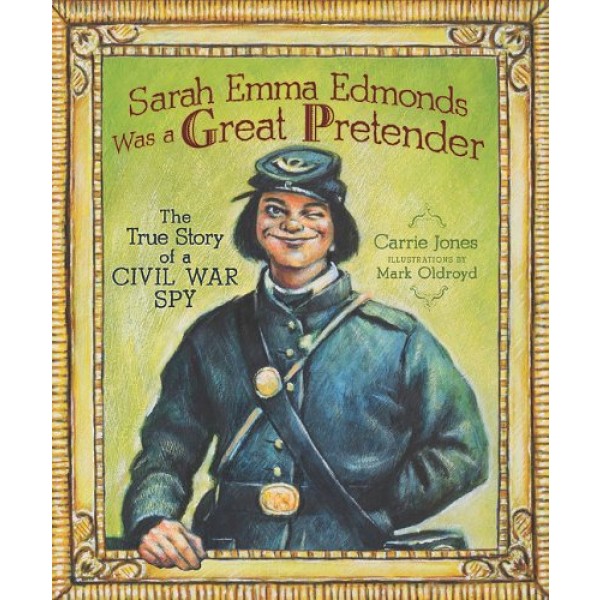 Sarah Emma Edmonds Was a Great Pretender: The True Story of a Civil War Spy

Sarah Emma Edmonds started pretending at a very early age. Her father only wanted sons, so Sarah pretended to be one. Unlike most kids, though, Sarah never really stopped pretending.

In 1861, during the U.S. Civil War, Sarah pretended her way into the Union Army, becoming a male nurse named Frank Thompson. Being a nurse didn't quite satisfy "Frank," though. She wanted to keep her fellow soldiers from getting hurt. So when the Union Army needed a spy, she leapt at the chance.

Sarah was not only good at pretending; she was also very brave. Later in life, Sarah Emma Edmonds wrote a book to tell her story. She explained, "I am naturally fond of adventure, a little ambitious, and a good deal romantic." She was also truly a great pretender.

"In Oldroyd's full-bleed spreads, characterized by strong cross-hatching and angular shapes, Edmonds's eyes twinkle with her secret knowledge, while Jones delivers her story with the assuredness of a natural storyteller." -- Publisher's Weekly

"The cover portraits cleverly introduce the book's topic. The front shows a person in a Civil War Union uniform, winking, with one hand hidden. The back presents a rear view of the same figure but now her fingers are shown to be crossed. Below the uniform, a skirt and parasol are displayed.... Using an informal, conversational style, Jones succeeds in keeping the complicated narrative at a level appropriate for young readers." -- School Library Journal