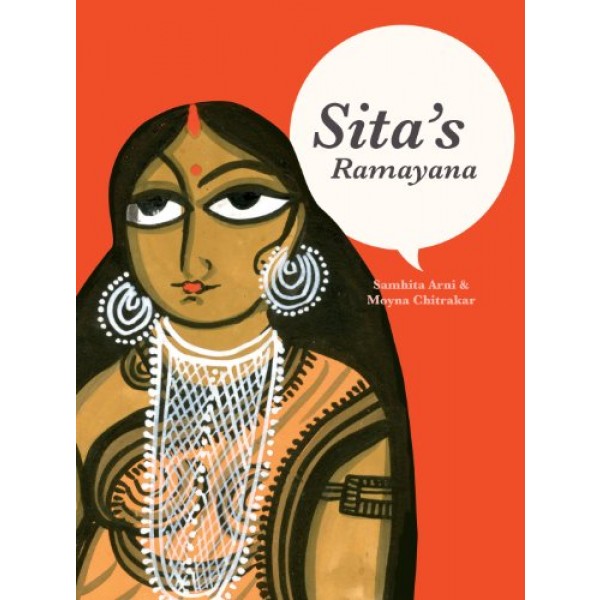 This graphic novel version of The Ramayana is told from the perspective of Sita, the queen. After she, her husband Rama and his brother are exiled from their kingdom, Sita is captured by the proud and arrogant king Ravana and imprisoned in a garden across the ocean. Ravana never stops trying to convince Sita to be his wife, but she steadfastly refuses his advances.

Eventually Rama comes to her rescue with the help of the monkey Hanuman and his army. But Rama feels he can't trust Sita again. He forces Sita to undergo an ordeal by fire to prove herself to be true and pure. She is shocked and in grief and anger does so. She emerges unscathed and they return home to their kingdom as king and queen. However, suspicion haunts their relationship, and Sita once more finds herself in the forest, but this time she is pregnant. She has twins and continues to live in the forest with them.

The Ramayana is an epic poem by the Hindu sage Valmiki, written in ancient Sanskrit sometime after 300 BC. It is an allegorical story that contains important Hindu teachings, and it has had great influence on Indian life and culture over the centuries. Children are often encouraged to emulate the virtues of the two main characters— Rama and Sita. The Ramayana is frequently performed as theater or dance, and two Indian festivals— Dussehra and Divali— celebrate events in the story.

The story is exciting and dramatic, with many turns of plot. Magic animals, snakes, divine gods, demons, sorcerers and a vast cast of characters all play a part in the fierce battles fought to win Sita back. And in the process the story explores ideas of right vs. wrong, compassion, loyalty, trust, honor and the terrible price of war.

"A must-purchase based on the strength of its dramatic story and arresting art, enhanced by superior design and high-quality production. Brilliant and fresh." — School Library Journal, starred review