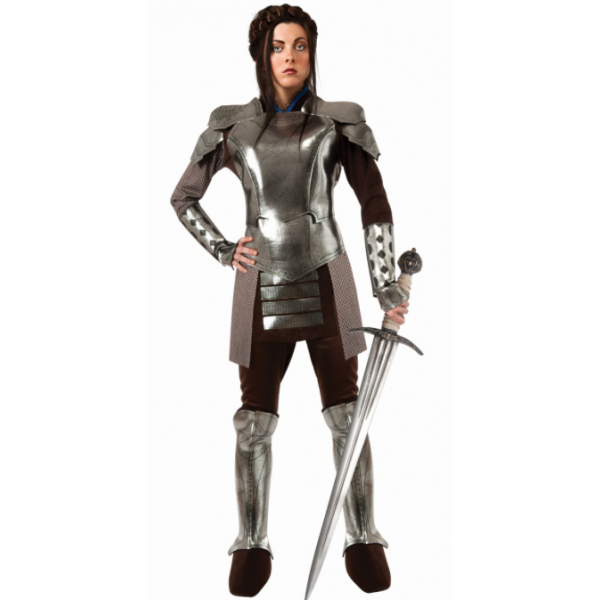 A stronger Snow White, wearing armor, as she appears in the movie Snow White and the Huntsman! The costume includes tunic, chest armor, shoulder pieces, gauntlets, pants, and attached boot tops and is available in women's standard size (fits up to dress size 14) and small (fits dress size 6 to 10).

Rubie's costume company has joined forces with Universal Partnerships and licensing to produce officially licensed costumes and accessories for the epic action-adventure movie Snow White and the Huntsman. In this exclusive costume collection, each character comes to life with a distinctive ensemble reminiscent of the role portrayed on the screen. From the Queen's dress, with its molded skull trim, to Snow White's armor and gauntlets, each costume incorporates unique elements that are specific to the film.

The costume collection also includes the Huntsman, with his coordinating accessories, such as swords, shields, hatchets, and daggers. Available in men's, women's and teen and tween sizes, fans everywhere will have the opportunity to dress as their favorite Snow White and the Huntsman character at fan events, the next ren faire, parties, and even halloween.