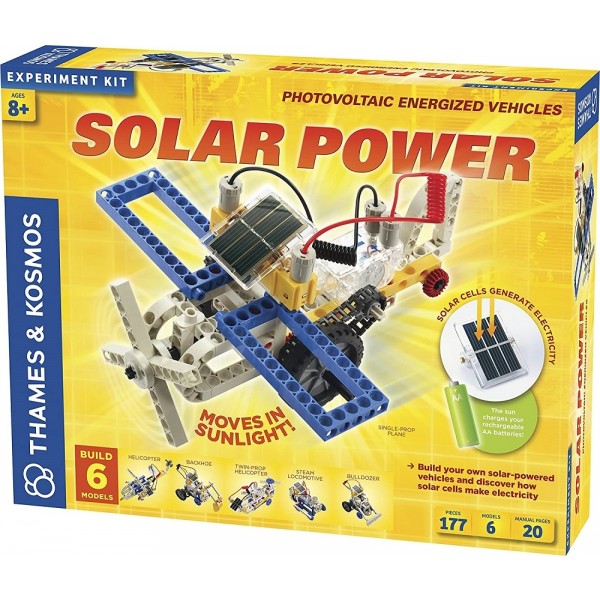 With the Solar Power Experiment Kit from Thames & Kosmos, you can build six solar powered models including a locomotive, single-prop plane, bulldozer, helicopter, backhoe, and twin-rotor helicopter! The special solar panel in this kit consists of three solar cells, and generates 1.5 volts of electricity in bright sunlight. A unique cradle holds either the solar panel or a battery, allowing you to switch out either depending on the strength of sunlight. You can even use the solar panel to charge up your own rechargeable AA batteries! The solar panel is positionable, so you can maximize its exposure to the sun to generate the most power.

The 24-page color instruction book included in this kit gives step-by-step instructions for assembling the six model vehicles. After you have built the suggested models, you can design your own solar vehicles! Compete with your friends to see whose solar vehicle runs the fastest. The 177 building pieces included in this set are compatible with those in all Thames & Kosmos Construction Series kits, Physics Series kits, Wind Power, and Hydropower kits. Requires one (1) rechargeable AA battery (not included).