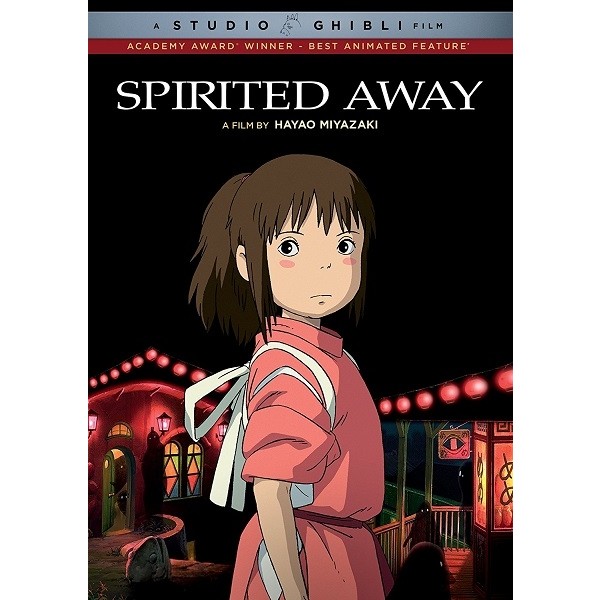 From one of the most celebrated filmmakers in the history of animated cinema comes the most acclaimed film of 2002 and the winner of that year's Academy Award for Best Animated Feature. Hayao Miyazaki's latest triumph, filled with astonishing animation and epic adventure, is a dazzling masterpiece for the ages. It's a "wonderfully welcoming work of art that's as funny and entertaining as it is brilliant, beautiful, and deep" (Joe Morgenstern, Wall Street Journal).

Spirited Away is a wondrous fantasy about a young girl, Chihiro, trapped in a strange new world of spirits. When her parents undergo a mysterious transformation, she must call upon the courage she never knew she had to free herself and return her family to the outside world. An unforgettable story brimming with creativity, Spirited Away will take you on a journey beyond your imagination.

The highest grossing film in Japanese box-office history (more than $234 million), Hayao Miyazaki's Spirited Away (Sen To Chihiro Kamikakushi) is a dazzling film that reasserts the power of drawn animation to create fantasy worlds. Like Dorothy in The Wizard of Oz and Lewis Carroll's Alice, Chihiro (voice by Daveigh Chase--Lilo in Disney's Lilo & Stitch) plunges into an alternate reality. On the way to their new home, the petulant adolescent and her parents find what they think is a deserted amusement park. Her parents stuff themselves until they turn into pigs, and Chihiro discovers they're trapped in a resort for traditional Japanese gods and spirits.

An oddly familiar boy named Haku (Jason Marsden) instructs Chihiro to request a job from Yubaba (Suzanne Pleshette), the greedy witch who rules the spa. As she works, Chihiro's untapped qualities keep her from being corrupted by the greed that pervades Yubaba's mini-empire. In a series of fantastic adventures, she purges a river god suffering from human pollution, rescues the mysterious No-Face, and befriends Yubaba's kindly twin, Zeniba (Pleshette again).

The resolve, bravery, and love Chihiro discovers within herself enable her to aid Haku and save her parents. The result is a moving and magical journey, told with consummate skill by one of the masters of contemporary animation. -- Charles Solomon

"To enter the world of Hayao Miyazaki is to experience a kind of lighthearted enchantment that is unique to the world of animation" -- Roger Ebert, Chicago Sun-Times.