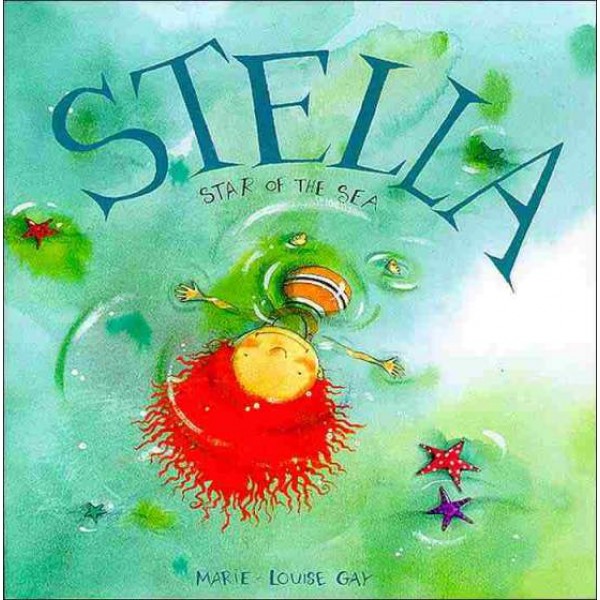 Stella, Star of the Sea

Stella and her little brother are spending the day at the beach. Stella has been to the seashore before and knows all its secrets, but Sam still has a lot of questions. Does a moonsnail come from the moon? What can you buy with a sand dollar? Stella has answers for them all. The only thing she's not sure about is whether Sam will ever come into the water. Through exquisite watercolors, this book brings to life a perfect summer day and the sweet and funny relationship between an older sister and her baby brother.

"This nonchalant slice-of-life tale with its sunny, eccentric illustrations makes for an enjoyable trip to the seashore." -- Publisher's Weekly

Marie-Louise Gay's squat, snub-nosed children with their frenzied locks are as familiar to under-fives as the wild things of Maurice Sendak. In Stella, Star of the Sea (which won a Governor General's Award for illustration), the gifted picture-book artist introduces the irresistible duo of Sam and his spirited older sister, Stella. "Stella and Sam were spending a day at the sea shore," Gay begins this playful celebration of summer, adding, "It was Sam's very first time." Stella is an adventurer, eager to dive to the ocean floor, tame sea horses, and dig a hole to China, but her little brother, Sam, is made of more cautious stuff. When Stella, looking out at the sea from the top of a delightfully round sand dune, exclaims, "Isn't it beautiful, Sam?" he observes with a characteristic deadpan, "It's very big... and noisy."

Gay humorously contrasts the children's impressions of the sea in pictures and dialogue that capture Sam's experience of its frightening enormity, as well as Stella's joy in its secret treasures. To fend off the prospect of a swim, Sam keeps asking Stella anxious questions like "Does a sea horse gallop?" Stella's replies are as authoritative as they are imaginative: "'Yes!' cried Stella. 'And you can ride a sea horse bareback.'" Gay's whimsical watercolors show Stella swimming alongside tropical fish and holding onto the back of a child-sized pink sea horse, while Sam hangs behind, a tiny speck in a water ring on the distant shore. Ultimately, of course, Stella's irrepressible enthusiasm wins over Sam's sober hesitancy, and in the final image of this charming picture book the two of them float happily in a luminous blue green sea. -- Lisa Alward