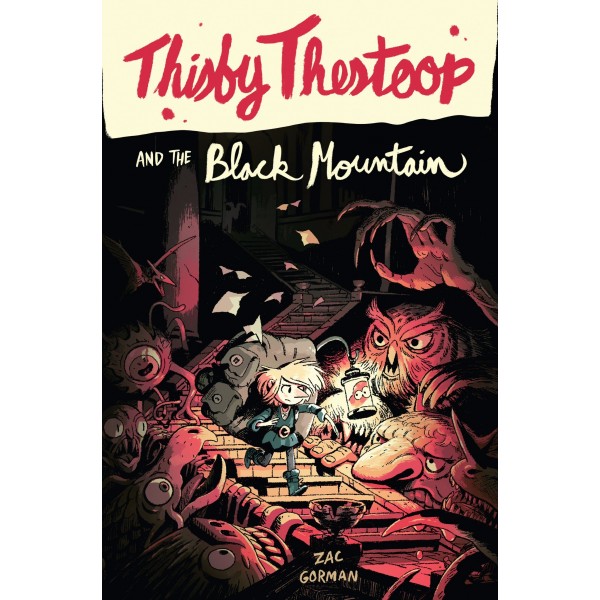 Thisby Thestoop and the Black Mountain

In the absurd land of Nth, Thisby Thestoop can be found within the forlorn walls of Castle Grimstone, down the precarious steps of the Black Mountain dungeon, up to her nose in griffon toenails, gnoll spittle, and troll meat (to give to them, not made of them). When the prince and princess arrive for a Royal Inspection, the much too good-looking Princess Iphigenia winds up lost in the tunnels of the dungeon — without her guards or her staff — and Prince Ingo ends up missing, presumed kidnapped. It's up to Thisby to guide the princess safely past the hoards of minotaurs, wyverns, ghouls, and who-knows-what-else that would love nothing more than to nosh the royal highness for dinner.

Thisby Thestoop and Princess Iphigenia have a dangerous adventure ahead of them. If they're going to a rescue the missing prince, stop a mounting war, and keep safe all the creatures who call the mountain dungeon home, they'll have to learn how to trust each other. Don't miss the first book in this rollicking new fantasy-adventure series from debut author Zac Gorman,contributor to the hilarious Rick and Morty comic series!

"In this peril-packed page-turner, first in a series, a pampered princess and a resourceful orphan girl struggle to stay alive in a monster-infested dungeon.... Comic book writer Gorman makes a strong children’s book debut, deconstructing the creature-filled caverns and trapped tunnel tropes prevalent in classic role-playing games (who feeds the monsters or oversees proper distribution of treasure, for instance?) while delivering a fast-paced, high-stakes adventure. Clever Thisby and forceful Iphigenia make a delightfully odd pairing as they form an unlikely friendship amid the chaos and danger." — Publishers Weekly