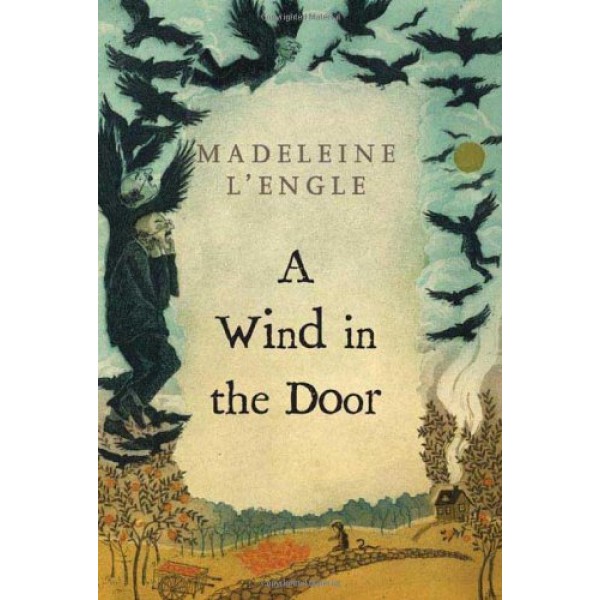 A Wind in the Door

In the sequel to the classic novel A Wrinkle In Time, it is November when Meg comes home from school and Charles Wallace tells her he saw dragons in the twin's vegetable garden. That night Meg, Calvin and C.W. go to the vegetable garden to meet the Teacher (Blajeny) who explains that what they are seeing isn't a dragon at all, but a cherubim named Proginoskes.

It turns out that C.W. is ill and that  Blajeny and Proginoskes are there to make him well -- by making him well, they will keep the balance of the universe in check and save it from the evil Echthros.

Meg, Calvin and Mr. Jenkins (grade school principal) must travel inside C.W. to have this battle and save Charles' life as well as the balance of the universe.

"Once again it is love that enables Meg to overcome evil, and L'Engle reaches mystical ecstasy in describing Meg's apprehension of the beauty and unity of the universe. Complex concepts of space and time are handled well for youn greaders, and the author creates a suspensful, life-and-death drama that is believably of cosmic significance. Complex and rich in mystical religious insights, this is breathtaking entertainment." -- School Library Journal

"There are dragons in the twins' vegetable garden," announces six-year-old Charles Wallace Murry in the opening sentence of The Wind in the Door. His older sister, Meg, doubts it. She figures he's seen something strange, but dragons--a "dollop of dragons," a "drove of dragons," even a "drive of dragons"--seem highly unlikely.

As it turns out, Charles Wallace is right about the dragons--though the sea of eyes (merry eyes, wise eyes, ferocious eyes, kitten eyes, dragon eyes, opening and closing) and wings (in constant motion) is actually a benevolent cherubim (of a singularly plural sort) named Proginoskes who has come to help save Charles Wallace from a serious illness.

In her usual masterful way, Madeleine L'Engle jumps seamlessly from a child's world of liverwurst and cream cheese sandwiches to deeply sinister, cosmic battles between good and evil. Children will revel in the delectably chilling details--including hideous scenes in which a school principal named Mr. Jenkins is impersonated by the Echthroi (the evil forces that tear skies, snuff out light, and darken planets).

When it becomes clear that the Echthroi are putting Charles Wallace in danger, the only logical course of action is for Meg and her dear friend Calvin O'Keefe to become small enough to go inside Charles Wallace's body--into one of his mitochondria--to see what's going wrong with his farandolae. In an illuminating flash on the interconnectedness of all things and the relativity of size, we realize that the tiniest problem can have mammoth, even intergalactic ramifications. Can this intrepid group voyage through time and space and muster all their strength of character to save Charles Wallace? It's an exhilarating, enlightening, suspenseful journey that no child should miss.

The other books of the Time quartet, continuing the adventures of the Murry family, are A Wrinkle in Time; A Swiftly Tilting Planet, which won the American Book Award; and Many Waters. -- Karin Snelson