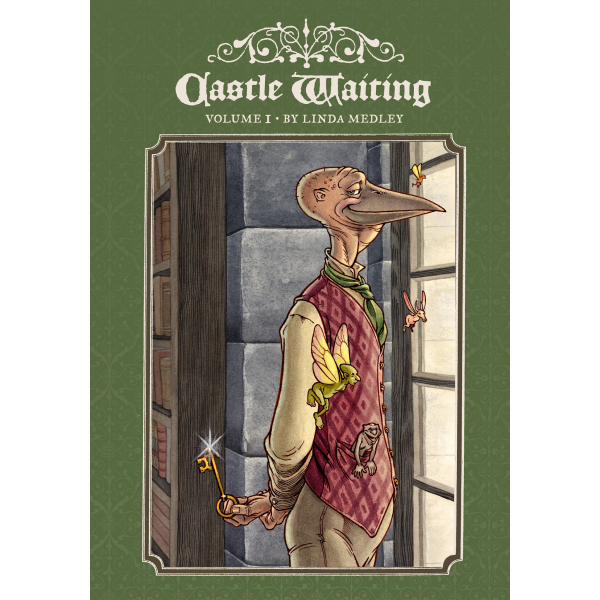 A fable for modern times, Castle Waiting is a fairy tale that's not about rescuing the princess, saving the kingdom, or fighting the ultimate war between Good and Evil but about being a hero in your own home.

The opening story, "The Brambly Hedge," tells the origin of the castle itself, which is abandoned by its princess in a comic twist on "Sleeping Beauty" when she rides off into the sunset with her Prince Charming. The castle becomes a refuge for misfits, outcasts, and others seeking sanctuary, playing host to a lively and colorful cast of characters that inhabits the subsequent stories, including a talking anthropomorphic horse, a mysteriously pregnant Lady on the run, and a bearded nun.

With its fresh, feminist take on traditional fairy tales, this widely acclaimed, award winning graphic novel is sure to delight children and parents alike.

"With its quiet blend of fantasy, folktales, and character-driven storytelling, this charming collection brings the first 12 issues of an Eisner Award-winning comic-book series to a wider audience. It opens with The Brambly Hedge, which gives the origin of the castle itself. In a comic retelling of Sleeping Beauty, a medieval castle and its loving inhabitants are abandoned when the princess wakes up, finds her Prince Charming, and rides off into the sunset with him. The castle transforms into an outpost of sorts for the unusual, the unwanted, and those just needing a place to hide from the world. Talking chivalrous horses, pregnant mothers on the run, and nuns who were once bearded ladies in the circus are just a few of the colorful inhabitants whose stories fill the remainder of the volume." -- Booklist