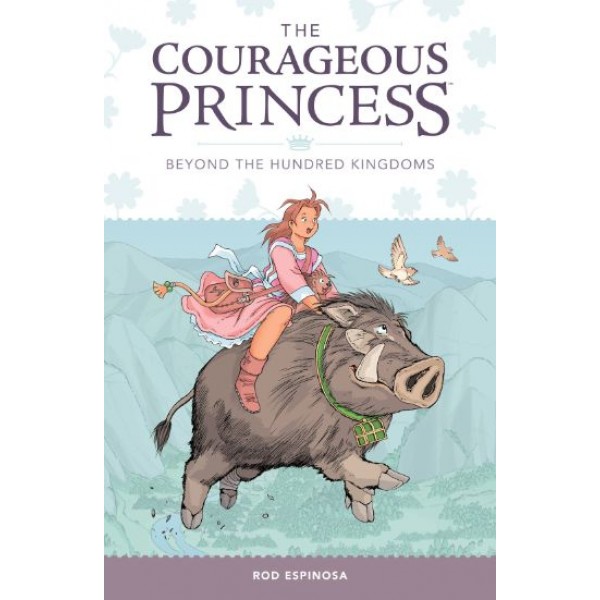 The Courageous Princess Vol. 1: Beyond the Hundred Kingdoms

In this stunning graphic novel, Princess Mabelrose may not be the fairest of the land, but she has enough brains and bravery to fend for herself in a fantasy world of danger and adventure! From a mighty dragon with an army of trolls, to a tyrant tiger king, Mabelrose meets each challenge with courage and pluck, her bravery winning her the help and friendship of many of the people, creatures and magical beings she encounters in her quest to find her way home.

For more stories of unconventional princesses, visit A Mighty Girl's Ultimate Guide to the Independent Princess.

"This unexpected tale of a young princess who rescues herself from an evil dragon is seemingly for young readers yet should bewitch all fantasy fans. -- Publishers Weekly

"Once upon a time, in a tiny kingdom called New Tinsley, a young princess named Mabelrose lived in a small castle with her loving parents. Like so many other fairy tale princesses before her, Mabelrose was a kindhearted young girl who was well-loved by everyone. But unlike all other princesses, she did not posses the charming beauty and grace the rest had in abundance. She did not have hair as black as ebony or skin as white as snow. Instead, her hair was a dull muddy brown in color and her face was full of freckles. Even so, Mabelrose was a very special girl. Despite her unglamorous appearance and her awkwardness, she was quick on her feet and she was very smart. Of all the other princesses that have come and gone, it is she who will prove to be perhaps the best of them all.

Captured by an evil dragon, she does what no other princess ever attempted in fairy tale history: she escapes all by herself! Her brave flight from the dragon's black fortress would be but the beginning of a long and exciting adventure. It is an epic journey that will test her strength, her courage and her love to its limits; a quest which will take her to many strange lands. Along the way, she would meet many enemies, make many more friends, and finally find true love. It is a story of a brave and resourceful young princess and her journey to find her home.