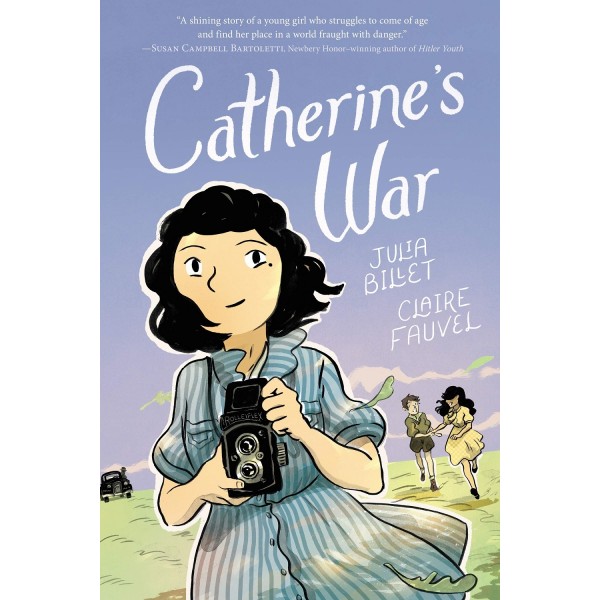 At the Sèvres Children's Home outside Paris, Rachel Cohen has discovered her passion — photography. Although she hasn't heard from her parents in months, she loves the people at her school, adores capturing what she sees in pictures, and tries not to worry too much about Hitler's war. But as France buckles under the Nazi regime, danger closes in, and Rachel must change her name and go into hiding.

As Catherine Colin, Rachel Cohen is faced with leaving the Sèvres Home — and the friends she made there — behind. But with her beautiful camera, Catherine possesses an object with the power to remember. For the rest of the war, Catherine bears witness to her own journey, and to the countless heroes whose courage and generosity saved the lives of many, including her own.

Based on the author's mother's own experiences as a hidden child in France during World War II, this powerful and accessible historical graphic novel also includes a map and photographs of the real Catherine and her wartime experiences, as well as an interview with author Julia Billet.

"Before being whisked away by the French resistance, Catherine’s teacher asks her to take pictures of the war ('We’ll need these testimonies'). After, she lives an itinerant life, traveling from a Catholic boarding school in Saint-Eustache to a peasant farm near Limoges and later to an orphanage in the Pyrenees. Though fear and trauma haunt the country, Catherine encounters the selflessness and sacrifice of strangers, becoming a selfless and generous young woman in the process.... Thoughtful meditations on the importance of art and shared connection combine with historical fact to make Catherine’s journey feel relevant." — Publishers Weekly