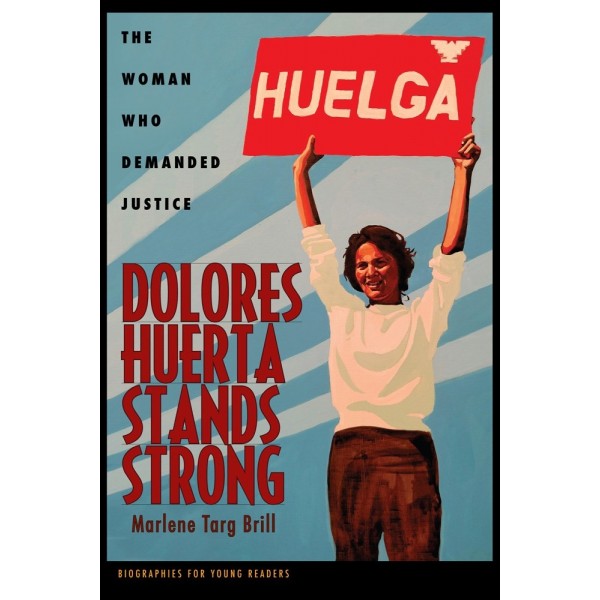 Today, we know Dolores Huerta as the cofounder, with Cesar Chavez, of the National Farmworkers Association, which later became the United Farm Workers of America. We know her as a tireless advocate for the rights of farmworkers, Mexican American immigrants, women, and LGBTQ populations. And we know her as the recipient of the Presidential Medal of Freedom from Barack Obama in 2012.

Before all that, though, Huerta was a child in the farming community of Stockton, California, and then a teenager whose teachers underestimated her because she was Chicana. When she became a teacher herself, she witnessed her students coming to school shoeless and hungry. Many took days off from school to work in the farm fields to help feed their families. What could she do to help them?

Dolores Huerta Stands Strong follows Huerta’s life from the mining communities of the Southwest where her father toiled, to the vineyards and fields of California, and across the country to the present day. As she worked for fair treatment for others, Dolores earned the nation’s highest honors. More important, she found her voice. This award-winning biography is a powerful, nuanced introduction to one of America's great labor activists.

"Brill's writing is clear and accessible for middle grade readers; she takes complex issues, such as unionizing, collective bargaining, and Communism, and makes them comprehensible for the intended audience. Many of the issues Huerta championed — workers' rights, the living conditions of immigrants, women's equality — are still timely topics that will resonate with today's youths. Photographs help bring Brill's text to life, and the extensive back matter will lead readers to further research. This well-told, age-appropriate account of a vital and essential activist deserves a place in all middle grade collections." — Melissa Kazan, School Library Journal