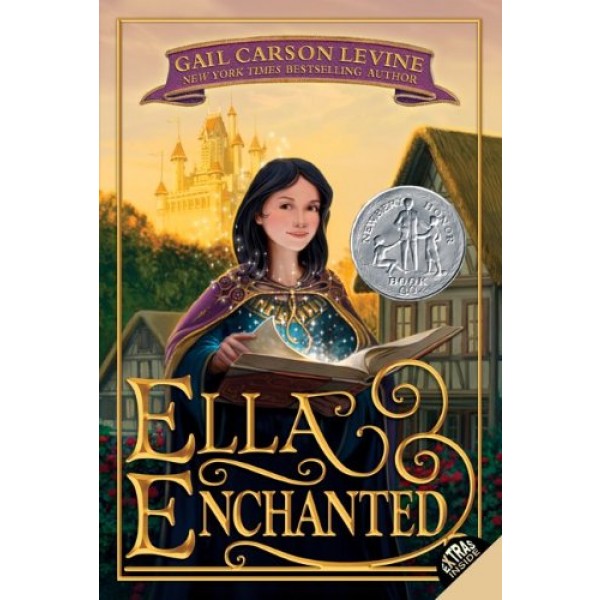 How can a fairy's blessing be such a curse?

At her birth, Ella of Frell was given a foolish fairy's gift--the "gift" of obedience. Ella must obey any order given to her, whether it's hopping on one foot for a day or chopping off her own head! But strong-willed Ella does not tamely accept her fate. She goes on a quest, encountering ogres, giants, wicked stepsisters, fairy godmothers, and handsome princes, determined to break the curse -- and live happily ever after.

"Cinderella meets Goody Two-shoes in this tale about a girl cursed by the 'gift' of obedience. Ella is, nonetheless, a take-charge, intuitive heroine who, despite her love for Prince Char, learns how to just say, 'no'" -- School Library Journal

At birth, Ella is inadvertently cursed by an imprudent fairy named Lucinda, who bestows on her the "gift" of obedience. Anything anyone tells her to do, Ella must obey. Another girl might have been cowed by this affliction, but not feisty Ella: "Instead of making me docile, Lucinda's curse made a rebel of me. Or perhaps I was that way naturally."

When her beloved mother dies, leaving her in the care of a mostly absent and avaricious father, and later, a loathsome stepmother and two treacherous stepsisters, Ella's life and well-being seem in grave peril. But her intelligence and saucy nature keep her in good stead as she sets out on a quest for freedom and self-discovery, trying to track down Lucinda to undo the curse, fending off ogres, befriending elves, and falling in love with a prince along the way. Yes, there is a pumpkin coach, a glass slipper, and a happily ever after, but this is the most remarkable, delightful, and profound version of Cinderella you've ever read.

Gail Carson Levine's examination of traditional female roles in fairy tales takes some satisfying twists and deviations from the original. Ella is bound by obedience against her will, and takes matters in her own hands with ambition and verve. Her relationship with the prince is balanced and based on humor and mutual respect; in fact, it is she who ultimately rescues him. Ella Enchanted has won many well-deserved awards, including a Newbery Honor. -- Emilie Coulter