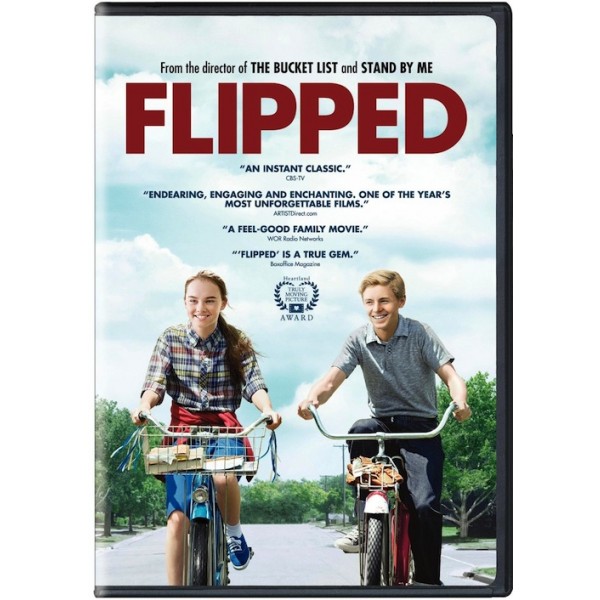 When second-graders Bryce and Juli first meet, Juli knows it's love. Bryce isn't so sure. In the days and years ahead, Bryce (Callan McAuliffe) does all he can to keep his wannabe girlfriend at arm's length -- and the smart, independent-minded Juli (Madeline Carroll) continues to give him the benefit of the doubt.

This tender coming-of-age romantic comedy from director Rob Reiner takes the pair from grade school to junior high, through triumph and disaster, family drama and first love, as they make discoveries that will define who they are -- and who they are to each other.

This film was based on Wendelin Van Draanen's novel of the same name; you can read about the book here.

Even if you're not a child of the early '60s, Flipped's tale will resonate with your heart. Director Rob Reiner treats viewers to a sweet but honest glimpse into the lives of a young girl and boy during the early 1960s as they maneuver through first crushes and heartbreak. Reiner once again shows he understands how to put together a compelling, yet simple, human story. We meet Juli Baker (Madeline Carroll) and Bryce Loski (Callan McAuliffe) on the day Bryce's family moves across the street from Juli's. Told by "flipping" between Juli and Bryce's voices, a tale of early childhood love emerges.

Juli loves Bryce's baby blues from the first moment she sees them and she just knows he's holding onto her first kiss. Bryce thinks Juli, who raises chickens and loves the neighborhood sycamore tree, is weird. The story doesn't merely flip between the two stories, though. In 1963, the year eighth grade comes around, Juli begins to wonder if there's any substance behind those baby blues, just as Bryce starts to see Juli's eccentricities as endearing instead of embarrassing.

Sweetly reminiscent without a saccharine aftertaste, the overall story is perhaps a tad predictable but is skillfully directed and acted--the families are played by a supporting cast of recognizable names, including Aidan Quinn, Anthony Edwards, Rebecca De Mornay, Penelope Ann Miller, and John Mahoney--so that you don't mind getting exactly what you expect. Based on the novel of the same name by Wendelin Van Draanen. -- Jill Corddry