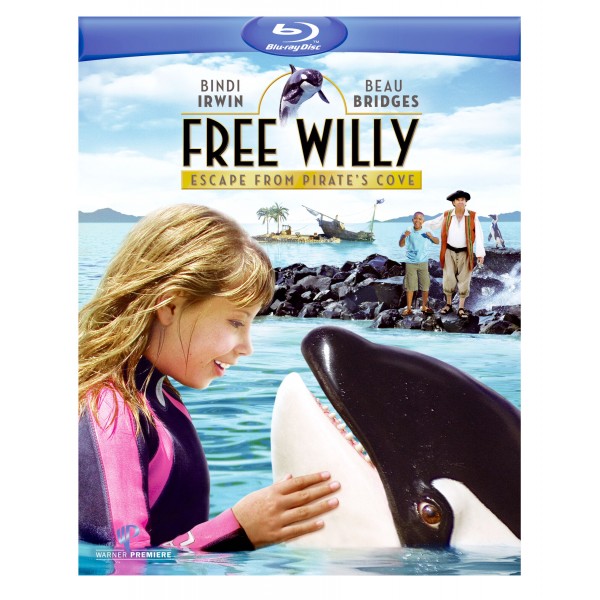 The fun and adventure are back! Fans of the Free Willy series will cheer this exciting family film about a baby orca who needs a friend and a girl who finds the courage to help him. After young Kirra (Bindi Irwin) leaves her Australian home to summer with her grandfather (Beau Bridges) in South Africa, she soon discovers a baby orca stranded in the lagoon near her grandfather's rundown seaside amusement park.

She names the lonely whale Willy--and embarks on a great quest to lead the little guy back to his anxious pod before her grandfather's greedy rival turns Willy into a captive, moneymaking attraction at his slick theme park. A little girl, a little orca and big, big fun and adventure!

More a retelling of the original 1993 Free Willy film than a third sequel in the series, Free Willy: Escape from Pirate's Cove is the story of a young whale who's separated from his pod, used in a moneymaking scheme, and befriended by a young girl who ultimately makes a huge difference in the young whale's life. The film stars Bindi Irwin (daughter of the late Crocodile Hunter Steve Irwin and host of the TV nature documentary series Bindi the Jungle Girl) in her first film, and she is surprisingly believable and passionate in her role as Kirra, if not entirely polished. Beau Bridges plays Kirra's grandfather, Gus, a down-on-his-luck gambler and owner of a dilapidated amusement park who's obsessed with making money.

When Kirra's father is injured, Gus is unexpectedly saddled with caring for his granddaughter over the summer. Bongo Mbutuma, Siyabulela Ramba, and Stephen Jennings round out the cast. When a young orca becomes trapped in the lagoon at Gus's ocean-side amusement park in South Africa, Kirra and her grandfather clash over the whale's future. Kirra quickly dubs the whale Willy and pleads with her grandfather to set him free, but Gus wants to use Willy to boost profits.

When a mammal rescue group determines that Willy's underdeveloped echolocation makes him unfit to survive alone in the wild, Kirra bristles at their suggestion to put Willy down, and she vows to rehabilitate the orca. Meanwhile, Kirra's grandfather contemplates selling Willy to a neighboring park owner at a handsome profit, in hopes that he will have the necessary funds to properly house and care for Willy. More than just a story about right versus wrong, Free Willy: Escape from Pirate's Cove is an exploration of a much more complicated ethical dilemma in which the best course of action is unclear. As the characters each struggle to choose the right path, what becomes crystal clear is the power of perseverance and the personal growth that results from love, adversity, and challenge.

While the CGI graphic scenes of the orca pods swimming are admittedly poor and some other aspects of this film could have been improved, Escape from Pirate's Cove is still a good family film with a heartfelt message. Bonus features include a fairly interesting featurette about filming on location in South Africa, Bindi's first movie diary, a quick look at the film's animal costars, two deleted scenes, and one outtake. The Blu-ray also features a pop-up trivia option that runs the length of the film. -- Tami Horiuchi