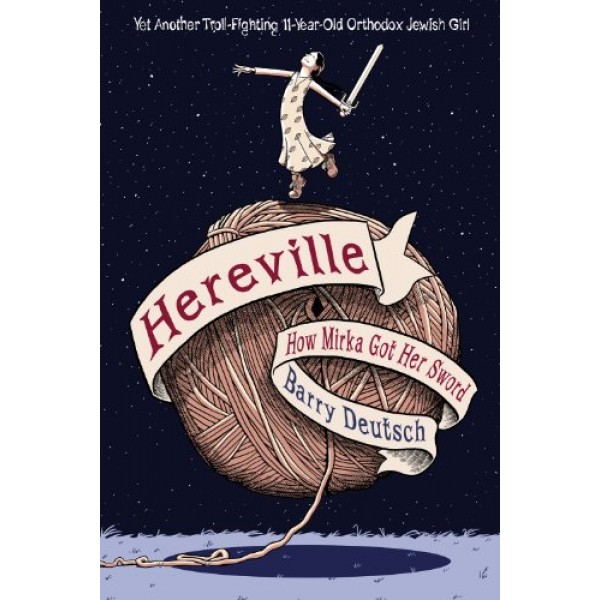 Hereville: How Mirka Got Her Sword

Spunky, strong-willed eleven-year-old Mirka Herschberg isn't interested in knitting lessons from her stepmother, or how-to-find-a-husband advice from her sister, or you-better-not warnings from her brother. There's only one thing she does want: to fight dragons!

Granted, no dragons have been breathing fire around Hereville, the Orthodox Jewish community where Mirka lives, but that doesn't stop the plucky girl from honing her skills. She fearlessly stands up to local bullies. She battles a very large, very menacing pig. And she boldly accepts a challenge from a mysterious witch, a challenge that could bring Mirka her heart's desire: a dragon-slaying sword! All she has to do is find and outwit the giant troll who's got it!

A delightful mix of fantasy, adventure, cultural traditions, and preteen commotion, this graphic novel will captivate middle-school readers with its exciting visuals and entertaining new heroine. Mirka's adventures continue in the sequel, Hereville: How Mirka Met a Meteorite

“Mirka is the heroine that girlhood dreams are made of: questioning and smart and willing to take on the world. She constantly battles wits with her stepmother, Fruma, whose argumentative nature and sharp nose conceal a warm and caring nature. Readers view the image of Mirka's deceased mother, who continues to play an influential role in her life. The child, stuck at home with knitting needles, longs to wield a sword and do battle with dragons. Instead she finds herself caught in a battle of wills with a talking pig. That's right: scenes of an Orthodox Jew with a pig add to the humor.

The story is a captivating mixture of fantasy and a realistic look at a culture. The girl encounters both a mind-reading witch and a multilingual troll in her quest for a sword with which to fight dragons. Yiddish language and Jewish customs are an essential part of the story and provide excellent bedrock to the tale without overwhelming it . . . With engaging characters and delightful art, Hereville is pure enchantment." -- School Library Journal