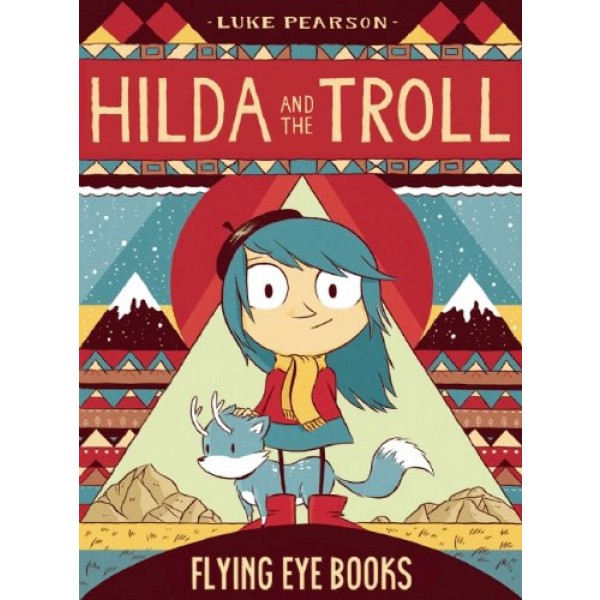 Hilda and the Troll

Hilda can never sit still for long without setting off on another adventure. She can't resist exploring her enchanting world — a place where trolls walk, crows speak, and mountains move. The magic and folklore of the wild, windswept North come alive in this book about an adventurous little girl and her habit of befriending anything, no matter how curious it might seem.

While on an expedition to illustrate the magical creatures of the mountains around her home, Hilda spots a mountain troll. As the blue-haired explorer sits and sketches, she slowly starts to nod off. By the time she wakes up, the troll has totally disappeared and, even worse, Hilda is lost in a snowstorm. On her way home, Hilda befriends a lonely wooden man, and narrowly avoids getting squashed by a lost giant.

This brand new hardback edition of Hilda and the Troll is packed with bonus, never-before-seen content and offers a fresh chance to read the very first outing in Luke Pearson's ever-popular series of magical Hilda adventures. This exciting tale will appeal to kids and adults alike, as will the gorgeous illustrations in this lush graphic novel series, which continues with Hilda and the Midnight Giant and Hilda and the Bird Parade.

"Hilda is the little girl. And this is her folk tale. And pretty much everything you need to know about how good this is, is there on that absolutely gorgeously delightful cover above. By the end of it, you'll have exactly the same smile as Hilda has." -- Forbidden Planet

"Hilda and the Troll presents a terse tale of the precocious, blue-haired child, Hilda — and essentially just follows her around for a couple of days as she plays and explores and draws. Hilda lives in a mountainous hills-are-alive-with kind of setting and, as she is a child, has few responsibilities beyond staying out of Deep Trouble. Her current interests include reading about the different varieties of local trolls and scribbling in her sketchbook. Her companion is a blue-coated fox with adorable little antlers and her house is visited frequently and to her annoyance by a small man made of wood . . . the great joy in Hilda and the Troll lies in its visual expression of the girl’s life. Pearson’s art is playful and perfectly rendered" -- Good Ok Bad