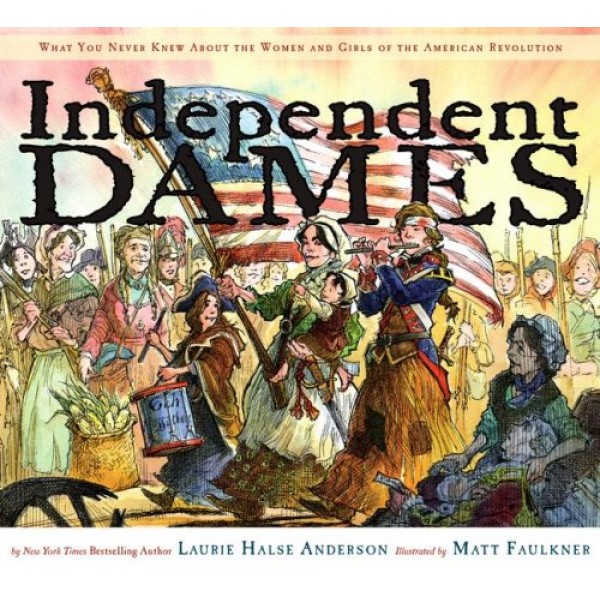 Independent Dames: What You Never Knew About the Women and Girls of the American Revolution

Listen up! You've all heard about the great men who led and fought during the American Revolution; but did you know that the guys only make up part of the story? What about the women? The girls? The dames? Didn't they play a part?

Of course they did, and with page after page of superbly researched information and thoughtfully detailed illustrations, acclaimed novelist and picture-book author Laurie Halse Anderson and charismatic illustrator Matt Faulkner prove the case in this entertaining, informative, and long overdue homage to those independent dames!

For more stories about girls and women of the Revolutionary Period, visit our blog post entitled "Remember the Ladies” -- A Mighty Girl Celebrates the Fourth of July.

"Whether the women were disguising themselves as men in order to be soldiers, raising money for suffering soldiers, sewing and knitting for the troops, or participating in protests or a boycott of British goods, their actions were significant. Faulkner's ink-and-watercolor illustrations are exuberant, often amusing, and filled with crosshatching and dialogue balloons." -- School Library Journal

Laurie Halse Anderson is the New York Times-bestselling author who writes for kids of all ages. Known for tackling tough subjects with humor and sensitivity, her work has earned numerous ALA and state awards. Two of her books, Speak and Chains, were National Book Award finalists. Chains also received the 2009 Scott O'Dell Award for Historical Fiction, and Laurie was chosen for the 2009 Margaret A. Edwards Award. Mother of four and wife of one, Laurie lives in Northern New York, where she likes to watch the snow fall as she writes. You can follow her adventures on Twitter, http://twitter.com/halseanderson, or her website MadwomanInTheForest.com.