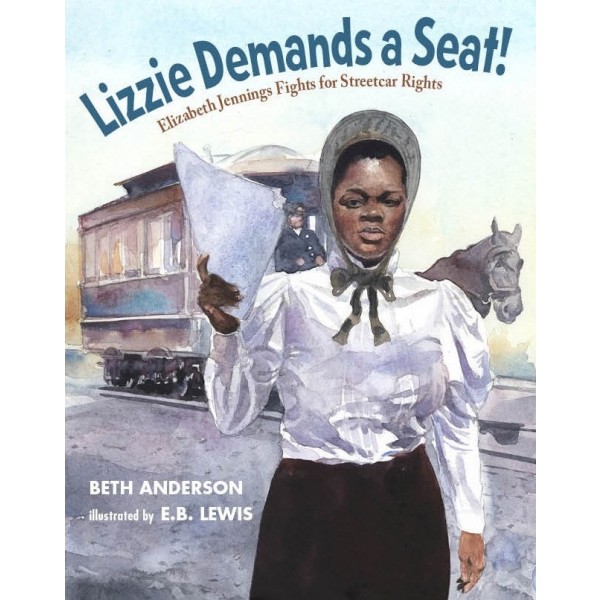 In 1854, Elizabeth "Lizzie" Jennings, an African American schoolteacher, fought back when she was unjustly denied entry to a New York City streetcar, sparking the beginnings of the long struggle to gain equal rights on public transportation. One hundred years before Rosa Parks took her stand, Jennings tried to board a streetcar in New York City on her way to church. Though there were plenty of empty seats, she was denied entry, assaulted, and threatened all because of her race — even though New York was a free state at that time.

Lizzie decided to fight back. She told her story, took her case to court — where future president Chester Arthur represented her —and won! Her victory was the first recorded in the fight for equal rights on public transportation, and Lizzie's case set a precedent. Author Beth Anderson and acclaimed illustrator E. B. Lewis bring this inspiring, little-known story to life in this captivating book.

"[Jennings'] refusal to leave leads to a contretemps with the law — and a white witness, whose expression of support bolsters her enough to file an eventual, successful, groundbreaking lawsuit. Anderson’s third-person text allows readers under Lizzie’s skin as her indignation at injustice mounts. Children will readily recognize both the conductor’s capricious cruelty and Lizzie’s anger that 'being born a "free black’" in a "free state"' does not mean being 'treated as equal'.... A two-page author’s note fleshes out the history, including mentions of Claudette Colvin and Rosa Parks." — Kirkus Reviews