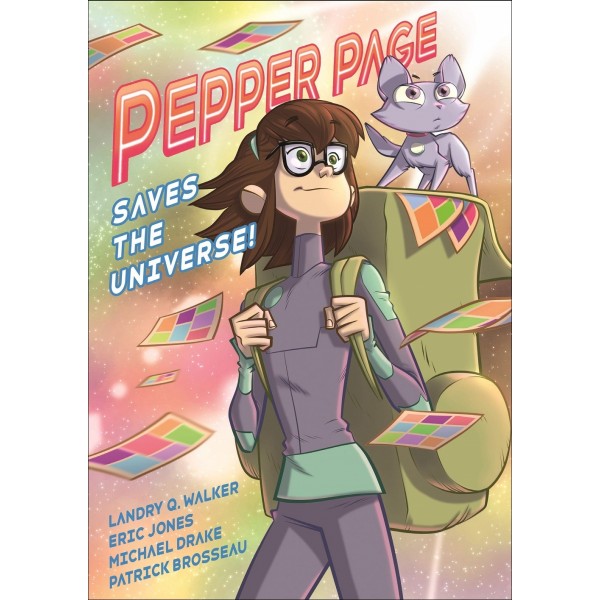 The year is 2421. Awkward and shy, Pepper buries herself in the universe of the classic fictional superhero Supernova to avoid dealing with the perils of the 9th grade. But then fate intervenes when Pepper encounters a strange cat named Mister McKittens and stumbles into a volatile science experiment run by a sinister substitute teacher named Doctor Killian.

Pepper is flung into another dimension, bringing her face to face with an order of cosmic beings who declare her to be the steward of their great power, champion of harmony in the universe, protector of worlds present and past. Now, in the 21st Century, Pepper finds that she herself is the real Supernova. But as Pepper soon learns, escapist fantasy and reality are two very different things.... This graphic novel is a middle-grade futuristic superhero story about a shy comic book girl-geek becoming her own superhero inspiration!

"Aided by Mister McKittens (the energies that transformed Pepper into Supernova also affected the cat), Pepper must prevent the pretentious, power-hungry Killian from assuming unimaginable power. There’s just one problem: Mired in trepidation, unsure of herself, and too familiar with Supernova’s arc, Pepper has no interest in saving the universe. Walker and Jones lean in to their metafictive adventure, deftly admixing superhero tropes into Pepper’s down-to-earth emotional journey.... A fast-paced, feel-good romp." — Kirkus Reviews