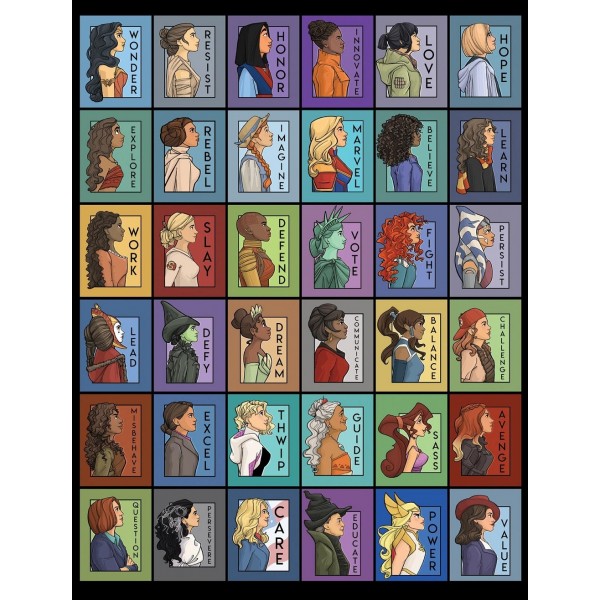 Celebrate the inspiring women of pop culture with this poster from artist Karen Hallion's She Series! This special edition, 18 by 24 inch poster, features Wonder Woman, Rey from Star Wars, Mulan, Moana, Princess Leia, Angelica Schuyler from Hamilton, Buffy the Vampire Slayer, Okoye and Shuri from Black Panther, Rose Tico from Star Wars, the 13th Doctor from Doctor Who, Captain Marvel, Meg Murry from A Wrinkle In Time, Hermione Granger, Lady Liberty, Merida from Brave, Ahsoka Tano from Star Wars, Amidala from Star Wars, Elphaba from Wicked, Tiana from The Princess and the Frog, Zoe Washburne from Firefly, Amy Santiago from Brooklyn 99, Spider-Gwen, Dana Scully from The X-Files, Sarah Williams from Labyrinth, Leslie Knope from Parks and Recreation, Peggy Carter from Agent Carter, Black Widow, Megara from Hercules, She-Ra, Dottie Hinson from A League of Their Own, Korra from Avatar: The Legend of Korra, Uhura from Star Trek, Professor Minerva McGonagall from Harry Potter, and Tala from Moana.

This high-quality poster is printed on 100 lb. paper and ships in a clear art sleeve, rolled, and mailed in a sturdy poster tube.