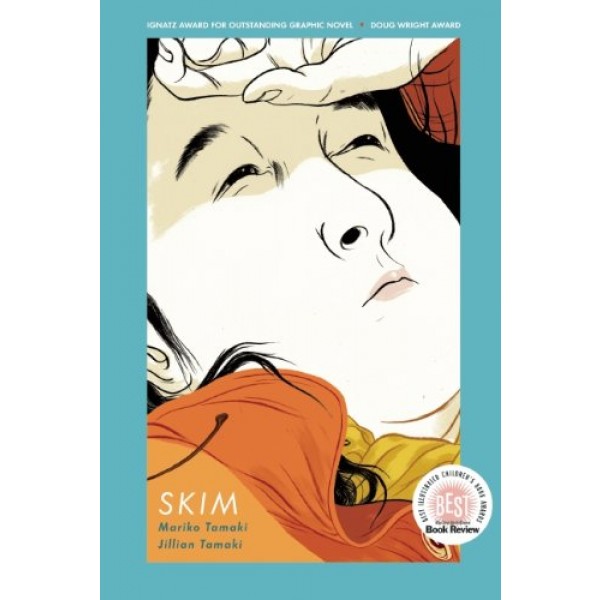 "Skim" is Kimberly Keiko Cameron, a not-slim, would-be Wiccan goth who goes to a private girls' school in the early '90s. When her classmate Katie Matthews is dumped by her boyfriend, who then kills himself - possibly because he's (maybe) gay - the entire school goes into mourning overdrive.

It's a weird time to fall in love, but that's what happens to Skim when she starts meeting secretly with her neo-hippie English teacher, Ms. Archer. But then Ms. Archer abruptly leaves the school, and Skim has to cope with her confusion and isolation while her best friend, Lisa, tries to pull her into "real" life by setting up a hilarious double-date for the school's semi formal. Suicide, depression, love, homosexuality, crushes, cliques of popular, manipulative peers - the whole gamut of teen life is explored in this poignant graphic novel.

"Kimberly Keiko Cameron–aka Skim–is a mixed-race high school student struggling with identity, friendships, and romantic yearning. After her parents' divorce, she turns to tarot cards and Wicca to make sense of life but finds herself disappointed with the lack of answers they provide. She finds herself increasingly intrigued by Ms. Archer, her free-spirited English teacher. Her interest becomes obsessive and it begins to drive a wedge between her and her best friend, Lisa. Although Skim originally makes light of the half-hearted suicide attempts of popular Katie, whose ex-boyfriend committed suicide, the two of them begin to open up to one another. Skim soon realizes that perfect Katie is far funnier, more genuine, and more traumatized than she originally thought–particularly when it comes to light that John shot himself due to his homosexuality. Drawn in an expressive, fluid style and with realistic dialogue, this work accurately depicts the confusion of teenage years." -- School Library Journal