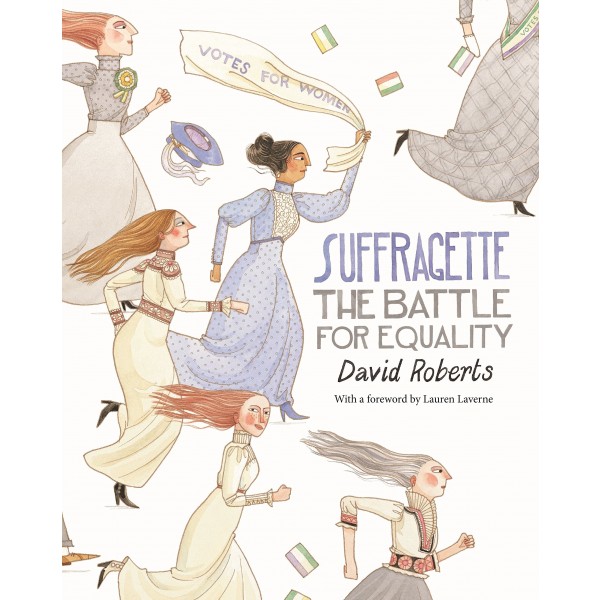 Suffragette: The Battle For Equality

Imprisonment, hunger strikes, suffrajitsu — the decades-long fight for women's right to vote was at times a ferocious one. Acclaimed artist David Roberts gives these important, socially transformative times their due in a colorfully illustrated history that includes many of the important faces of the movement in portraiture and scenes that both dignify and enliven. He has created a timely and thoroughly engaging resource in his first turn as nonfiction author-illustrator.

Suffragette: The Battle for Equality follows the trajectory of the movement in the U.K. and visits some key figures and moments in the United States as it presents the stories of Millicent Garrett Fawcett, Emmeline Pankhurst, Ida B. Wells, Susan B. Anthony, and many more heroic women and men. Filled with vivid illustrations throughout, this engaging book provides a unique resources to introduce the nuances of the Suffrage Movement in a vibrant, appealing package.

"Many of the diverse activists, such as journalist Ida B. Wells, are featured on pages of yearbook-style captioned portraits. Others, such as Britain’s Millicent Garrett Fawcett, the leader of Britain’s largest suffrage society, receive longer treatment, as doInterest-piquing titles headline each double spread ('1910: Suffrajitsu'), while a conversational narrative, aesthetically pleasing page design, and stunning visuals keep the complex topic accessible.... Roberts hasn’t shied from depicting the harsh realities of a struggle that also involved racism, classism, vandalism, and violence; one graphic scene, for example, depicts the forced tube feeding of a female prisoner on a hunger strike. Vignettes of female suffragists from around the world and a bibliography wrap up this engaging, stirring chronicle." — Publishers Weekly