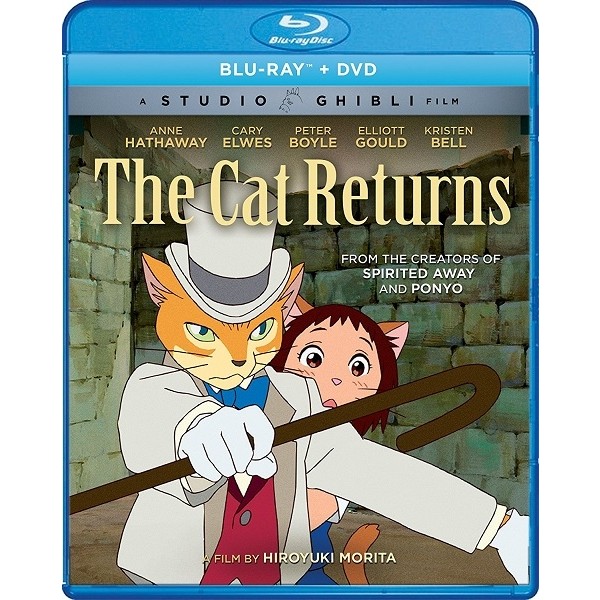 From the creators of the Academy Award winning Spirited Away (Best Animated Feature Film, 2002) comes the visually stunning The Cat Returns, a spectacular animated journey to a world of magic and adventure. Haru, a schoolgirl bored by her ordinary routine, saves the life of an unusual cat, and suddenly her world is transformed beyond anything she ever imagined. The Cat King rewards her good deed with a flurry of presents, including a very shocking proposal of marriage to his son!

Haru embarks on an unexpected journey to the Kingdom of Cats where her eyes are opened to a whole other world and her destiny is uncertain. To change her fate, she'll need to learn to believe in herself and appreciate her everyday life. Featuring the sensational voice talents of Anne Hathaway, Cary Elwes, Tim Curry, and Elliot Gould, The Cat Returns is a magical animated adventure that will delight and inspire everyone.

The Cat Returns (2002) brings back Muta, the cranky fat cat, and Baron von Gikkingen, the elegant statue, from the feature Whisper of the Heart (1995). On her way home from school, Haru, a confused 17-year-old, prevents an elegant gray cat from being hit by a truck. She's inadvertently saved the life of Lune, Prince of the Cat Kingdom, and his royal father decides to thank her. He fills her locker with gift-wrapped mice and decides she should come to his kingdom and marry Lune.

Haru seeks help from the Cat Bureau, and eventually returns to relatively normal life, with the assistance of Muta and the Baron.

The Cat Returns recalls Whisper of the Heart and Takashi Nakamura's Catnapped, but it offers neither the wistful charm of the former nor the bold visual imagination of the latter. Hayao Miyazaki has been seeking young directors for Studio Ghibli for several years. After preparing the script and storyboards for Whisper, he turned the film over to Yoshifumi Kondo, who died tragically shortly after the film's release.