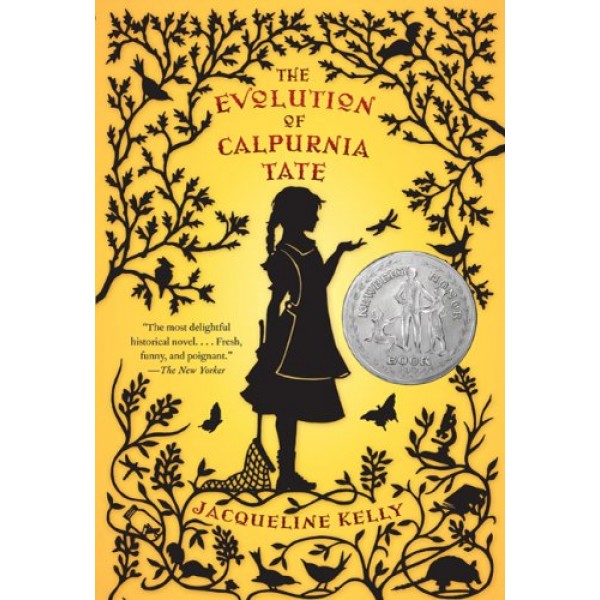 The Evolution of Calpurnia Tate

Calpurnia Virginia Tate is eleven years old in 1899 when she wonders why the yellow grasshoppers in her Texas backyard are so much bigger than the green ones. With a little help from her notoriously cantankerous grandfather, an avid naturalist, she figures out that the green grasshoppers are easier to see against the yellow grass, so they are eaten before they can get any larger. As Callie explores the natural world around her, she develops a close relationship with her grandfather, navigates the dangers of living with six brothers, and comes up against just what it means to be a girl at the turn of the century.

The Evolution of Calpurnia Tate is a 2010 Newbery Honor Book and the winner of the 2010 Bank Street - Josette Frank Award.

This novel was featured in A Mighty Girl's special collection of the Top Read Aloud Books Starring Mighty Girls.

"Growing up with six brothers in rural Texas in 1899, 12-year-old Callie realizes that her aversion to needlework and cooking disappoints her mother. Still, she prefers to spend her time exploring the river, observing animals, and keeping notes on what she sees. Callie’s growing interest in nature creates a bond with her previously distant grandfather, an amateur naturalist of some distinction. After they discover an unknown species of vetch, he attempts to have it officially recognized. This process creates a dramatic focus for the novel, though really the main story here is Callie’s gradual self-discovery as revealed in her vivid first-person narrative. By the end, she is equally aware of her growing desire to become a scientist and of societal expectations that make her dream seem nearly impossible." -- Booklist

"A charming and inventive story of a child struggling to find her identity at the turn of the 20th century." -- School Library Journal