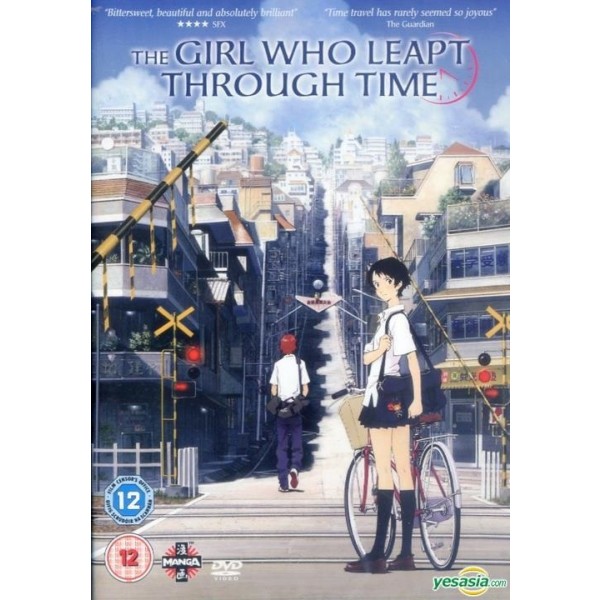 The Girl Who Leapt Through Time

Something strange has happened to Makoto Konno. Time has suddenly stopped and moved her backwards. With her newly discovered ability to literally leap backwards in time Makoto finds that tests become a piece of cake, embarrassing situations are corrected and she can have her favorite food anytime she wants. Unfortunately her carefree time traveling has adverse effects on the people she cares for. With every successful leap Makoto somehow alters the fate of those around her.

This was not supposed to happen and as she races back in time to fix everything, she notices that her abilities are not limitless but with every successful jump she is one step closer to discovering the most wonderful secret in her young adult life.

The Girl Who Leapt Through Time scored a big hit in Japan in 2006, and has been eagerly awaited by American otaku. Makoto Konno regards herself as a normal high-school student. She's smart, but not brilliant; a little clumsy, but not a klutz; well-liked, but not a social star. Her favorite pastime is playing baseball with her best friends: handsome, studious Kosuke Tsuda and shaggy, offbeat Chiaki Mamiya. When Makoto nearly loses her life in a bicycle accident, she escapes by moving back through time.

Her aunt tells her the talent isn't unusual in girls her age, and Makoto begins exploiting her ability. But her efforts to improve the present backfire, making school, friendship, and romance even more complicated and difficult--until she discovers a surprising secret about Chiaki. The Girl Who Leapt Through Time (Toki wo Kakeru Shoujo) has remained a popular property in Japan since Yasutaka Tsutsui's novel appeared in 1967: It's been filmed repeatedly in live action and adapted to a manga. Mamoru Hosoda's animated prequel to the original story blends warmth and fantasy in ways usually associated with Studio Ghibli films.

The relationship Makoto, Kosuke, and Chiaki share is exceptionally well-drawn, and nicely balances the fantastic elements of the story.) -- Charles Solomon