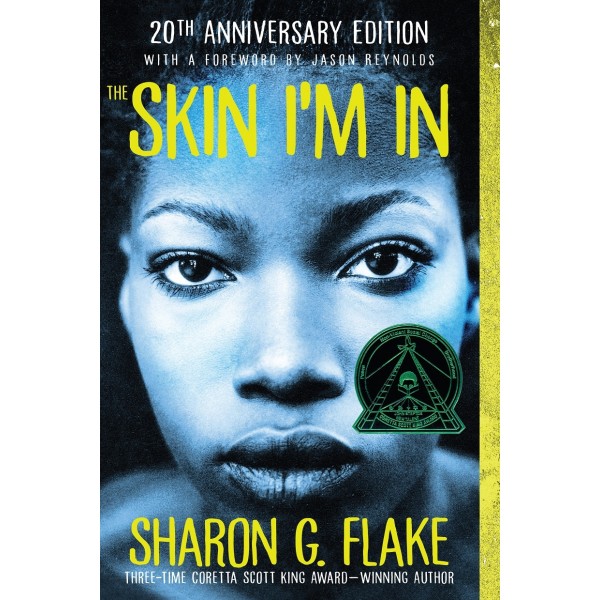 The Skin I'm In

Maleeka suffers every day from the taunts of the other kids in her class. If they're not getting at her about her homemade clothes or her good grades, it's about her dark, black skin.

When a new teacher, whose face is blotched with a startling white patch, starts at their school, Maleeka can see there is bound to be trouble for her too. But the new teacher's attitude surprises Maleeka. Miss Saunders loves the skin she's in. Can Maleeka learn to do the same?

"Told in Maleeka's voice, this first novel bristles with attitude that is both genuine and alarming. The young teen understands too well that her brains aren't as valuable as the social standing that she doesn't have. In the end, she is able to respond positively to Miss Saunders; she also becomes socially anointed through the affections of the most popular boy in the school. This message rings true in spite of the fact that Maleeka's salvation isn't exactly politically correct. Young teens will appreciate Flake's authenticity and perhaps realize how to learn from Maleeka's struggle for security and self-assurance." -- School Library Journal

Sharon G. Flake won the Coretta Scott King/John Steptoe New Talent Award for her first novel The Skin I'm In and is a two-time Coretta Scott King Author Honor Book winner. Belived by children and adults, critics and booksellers, librarians and teachers, she is the author of six books for yourng adults that have sold more than half a million copies.