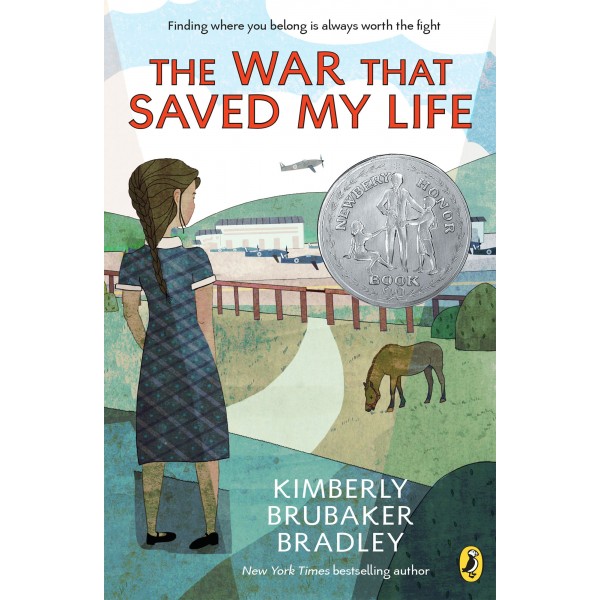 The War That Saved My Life

Nine-year-old Ada has never left her one-room apartment. Her mother is too humiliated by Ada's twisted foot to let her outside. So when her little brother Jamie is shipped out of London to escape the war, Ada doesn't waste a minute — she sneaks out to join him.

So begins a new adventure of Ada, and for Susan Smith, the woman who is forced to take the two kids in. As Ada teaches herself to ride a pony, learns to read, and watches for German spies, she begins to trust Susan — and Susan begins to love Ada and Jamie. But in the end, will their bond be enough to hold them together through wartime? Or will Ada and her brother fall back into the cruel hands of their mother? This masterful work of historical fiction is equal parts adventure and a moving tale of family and identity — a classic in the making.

Ada's story continues in the sequel, The War I Finally Won.

Ada watches the world through the narrow confines of the apartment window, waves to neighbors in the street, and carefully gauges the danger of being beaten during each encounter with her hateful mother.... Susan is reluctant and insists that she knows nothing about caring for children [but] she does so diligently and is baffled by the girl's fearful flinching anytime Ada makes a mistake. Though uneducated, Ada is intensely observant and quick to learn. Readers will ache for her as she misreads cues and pushes Susan away even though she yearns to be enfolded in a hug. There is much to like here -- Ada's engaging voice, the vivid setting, the humor, the heartbreak, but most of all the tenacious will to survive exhibited by Ada and the villagers who grow to love and accept her." — Brenda Kahn, School Library Journal