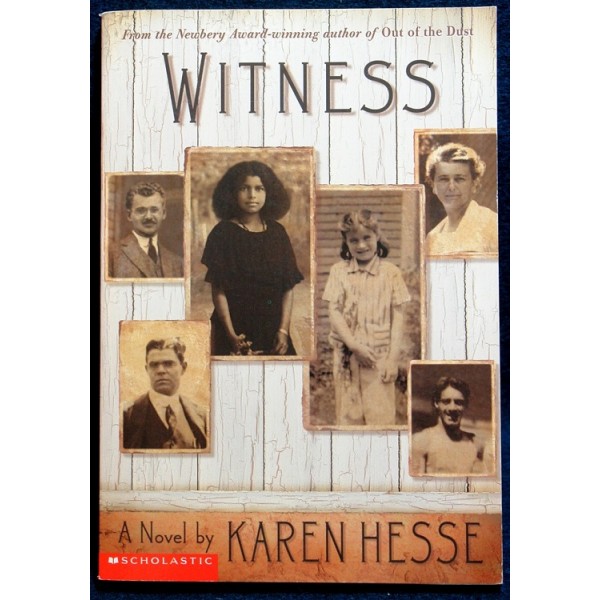 These characters are among the unforgettable cast inhabiting a small Vermont town in 1924. A town that turns against its own when the Ku Klux Klan moves in. No one is safe, especially the two youngest, twelve-year-old Leanora, an African-American girl, and six-year-old Esther, who is Jewish.

In this story of a community on the brink of disaster, told through the haunting and impassioned voices of its inhabitants, Newbery Award winner Karen Hesse takes readers into the hearts and minds of those who bear witness.

It is 1924, and a small Vermont town finds itself under siege--by the Ku Klux Klan. Using free verse, Newbery Medal-winning author Karen Hesse (Out of the Dust) allows 11 unique and memorable voices to relate the story of the Klan's steady infiltration into the conscience of a small, Prohibition-era community. The Klan's "all-American" philosophy is at first embraced by several of the town's influential men, including Constable Parcelle Johnson and retailer Harvey Pettibone. But Harvey's sensible wife, Viola, and independent restaurant owner Iris Weaver suspect from the beginning that the Klan's arrival heralds trouble. As the only African Americans in town, 12-year old Leonora Sutter and her father try to escape Klan scrutiny, while 6-year-old, city-born Esther Hirsch remains blissfully unaware of the Klan's prejudice against Jews as she enjoys the Vermont countryside. And Sara Chickering, the lady farmer who has opened her home to Esther and her father, is torn between her own hidden biases and her growing love for Esther.

All, however, are galvanized towards action when a shadowy figure shoots at Esther and her father right through Sara's front door. Who would commit such an evil act? And is it too late to remove the poison that has insidiously leaked into their once tight-knit community? Part mystery, part social commentary, Hesse's historically accurate chronicle is a riveting catalyst for discussion that thoughtfully explores race and identity from every possible point of view. The free verse format and distinct characterizations also make Witness a perfect choice for library or classroom reader's theater productions. -- Jennifer Hubert