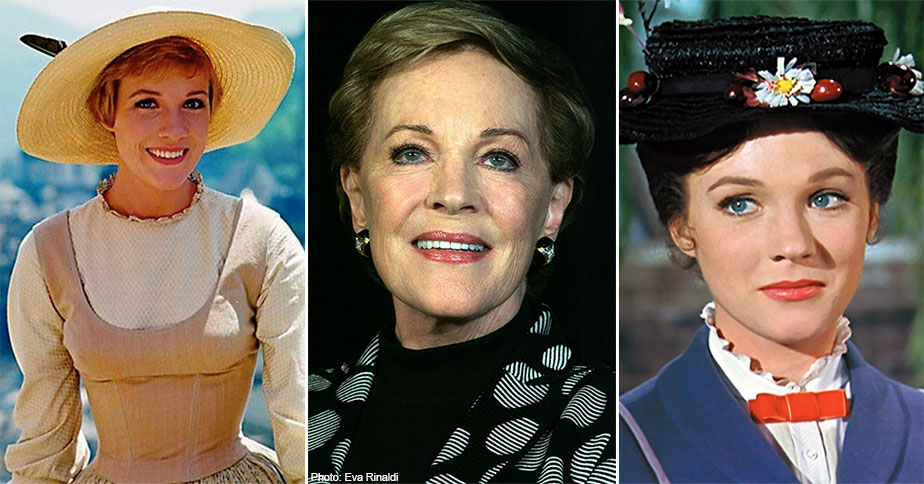 Whether you first met her on stage at the West End in London or Broadway in New York; on the screen as Mary Poppins, Maria von Trapp, or Queen Clarisse Renaldi; or as the author of a beloved children's book like Mandy or The Last of the Really Great Whangdoodles; or her memoirs Home and Home Work, chances are good you've been charmed by Julie Andrews! The legendary English performer and author is celebrating her 85th birthday today, and she's still touching the hearts of people around the world. Andrews is also quick to point out that her success over the years was far from smooth, however, providing an inspiring model of resilience for her fans young and old: "Perseverance," she says, "is failing 19 times and succeeding the 20th."

Born in Surrey, England in 1935, Andrews demonstrated a gift for singing from a young age. One of her early instructors, concert soprano Lilian Stiles-Allen, once wrote "the range, accuracy and tone of Julie's voice amazed me... she had possessed the rare gift of absolute pitch." Andrews began performing in 1945 with her mother and stepfather, and before long was singing solo professionally. In 1948, at the age of 13, she became the youngest solo performer to appear in a Royal Command Variety Performance, and was soon billed as "Britain's youngest prima donna." Although many encouraged her to consider a career in opera, she didn't feel her voice had "the necessary guts and weight for opera," and preferred to sing "bright and sunny" songs, so musical theater was a natural fit. 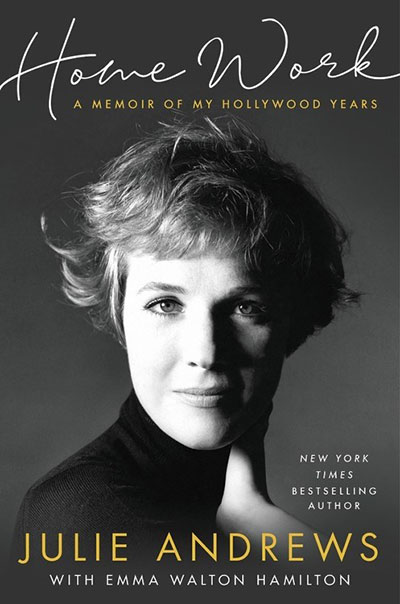 After performing for several years in London's West End and on BBC radio and television, Andrews moved to America in 1954 where she delighted Broadway audiences as Eliza Doolittle in My Fair Lady and Lady Guinevere in Camelot. Her stage career led to her first big movie role when Walt Disney chose her to play the iconic Mary Poppins, even delaying the start of production to accommodate her pregnancy. The film was hugely successful upon its release in 1964, winning Andrews' Best Actress awards at both the Oscars and Golden Globes. She starred in one of her most beloved roles of her career the following year as Maria von Trapp in The Sound of Music. The movie was the highest-grossing film of 1965 and won five Academy Awards, including Best Picture. Catapulted into stardom, Andrews continued to star in many more films over the years, including such hits as Thoroughly Modern Millie and Victor/Victoria.

In the midst of her Hollywood success, Andrews also became an author; her first two children's books Mandy and The Last of the Really Great Whangdoodles, became bestsellers and remain in print today. She co-authored many of her later children's books with her daughter, Emma Walton Hamilton, including The Very Fairy Princess, Simeon's Gift, Dragon: Hound of Honor, The Great American Mousical, Little Bo in Italy, and Thanks to You: Wisdom from Mother and Child.

In 1997, Andrews faced one of her biggest professional and personal challenges after she developed problems with her voice, and a surgery that was supposed to remove nodules from her vocal cords — which she later found out she did not even have — caused permanent damage. "[Losing my voice] was one of the hardest things to deal with," she later reflected. "And I did think it was maybe one of the worst things that could possibly happen, because I enjoyed and love singing so much." It took multiple additional surgeries, and very careful recovery and practice, before she felt she could try again. The next time she would sing on screen was in 2001's The Princess Diaries; the song was deliberately set in a range that accommodated her recovering voice. The appearance marked the beginning of a career revival, and she has since appeared or voiced characters in Eloise, Shrek, Enchanted, Aquaman, and Despicable Me.

Andrews has received accolades around the world for her long and distinguished career, including being made a Dame Commander of the Order of the British Empire, receiving Kennedy Center Honors, and being granted a Screen Actors Guild Life Achievement Award. Today, she continues to spread a message to both children and adults about the importance of dreams, perseverance, and preparation. "Sometimes opportunities float right past your nose," she observes. "Work hard, apply yourself, and be ready. When an opportunity comes you can grab it." 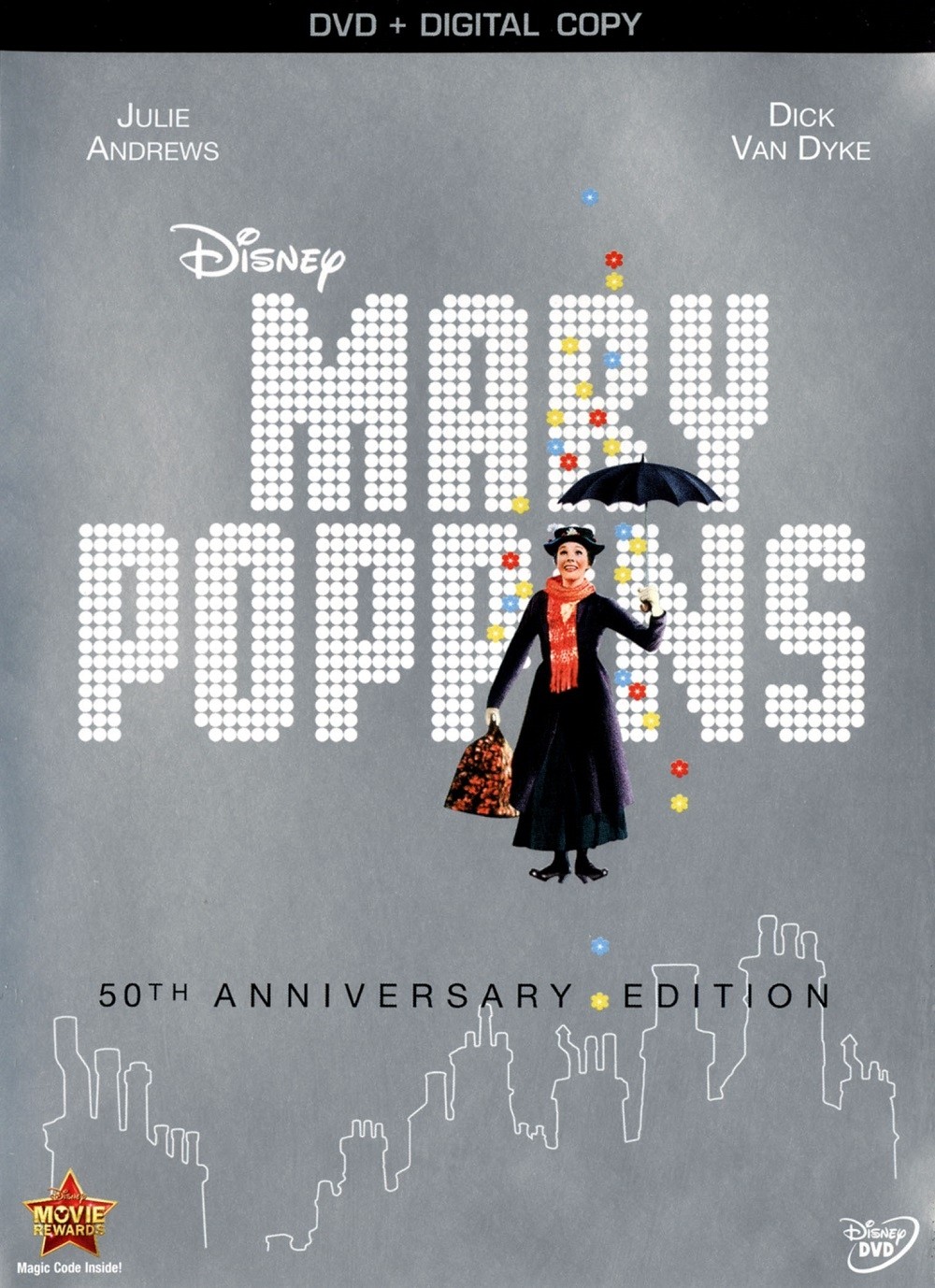 Recommended Age: 4 and up

The Banks family will never be the same thanks to the "practically perfect" Mary Poppins! Julie Andrews stars as the inimitable and magical nanny in this Disney film that combines live action with delightful animation to create a whimsical story about imagination, family, and adventure. In this fully restored and remastered 2-disc 40th Anniversary Edition, you'll also get an all-new animated short and a never-before-heard deleted song. And for a sequel for a new generation starring Emily Blunt, check out Mary Poppins Returns. 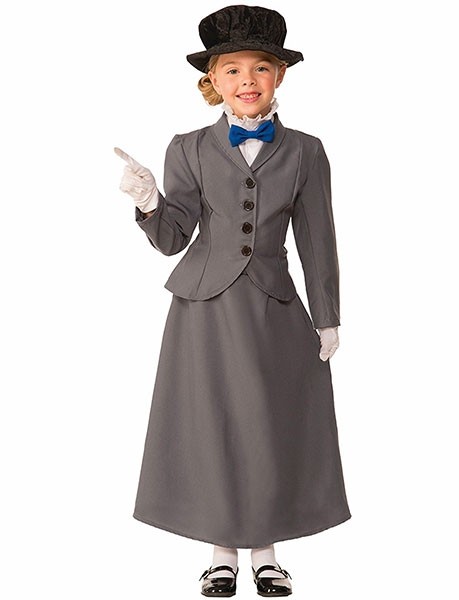 She'll feel like the real Mary Poppins in this British nanny costume from Forum Novelties! Perfect for dress-up, stage performances, or Halloween, this high-quality costume is easy to wear and perfect to play the part. This costume set comes with a hat, a jacket, a shirt front with and attached bowtie, and a skirt. For two more costumes for kids, check out the Mary Poppins Chalk Drawing Costume for ages 4 to 12 and the Mary Poppins Returns Costume for ages 3 to 12. 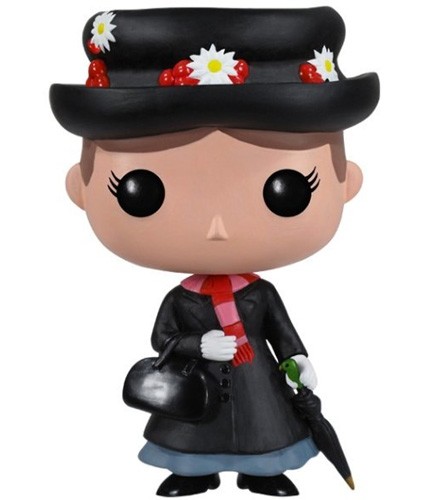 Manufacturer: Funko
Recommended Age: 5 and up

Get ready for some amazing adventures with this stylized version of Mary Poppins. This figure shows the mysterious and magical nanny with her umbrella and carpet bag. At 3 3/4" tall, she's just the right size for display on a desk or shelf. Now you just have to practice your supercalifragilisticexpialidocious! You can find other products featuring this popular character in our Mary Poppins Collection. 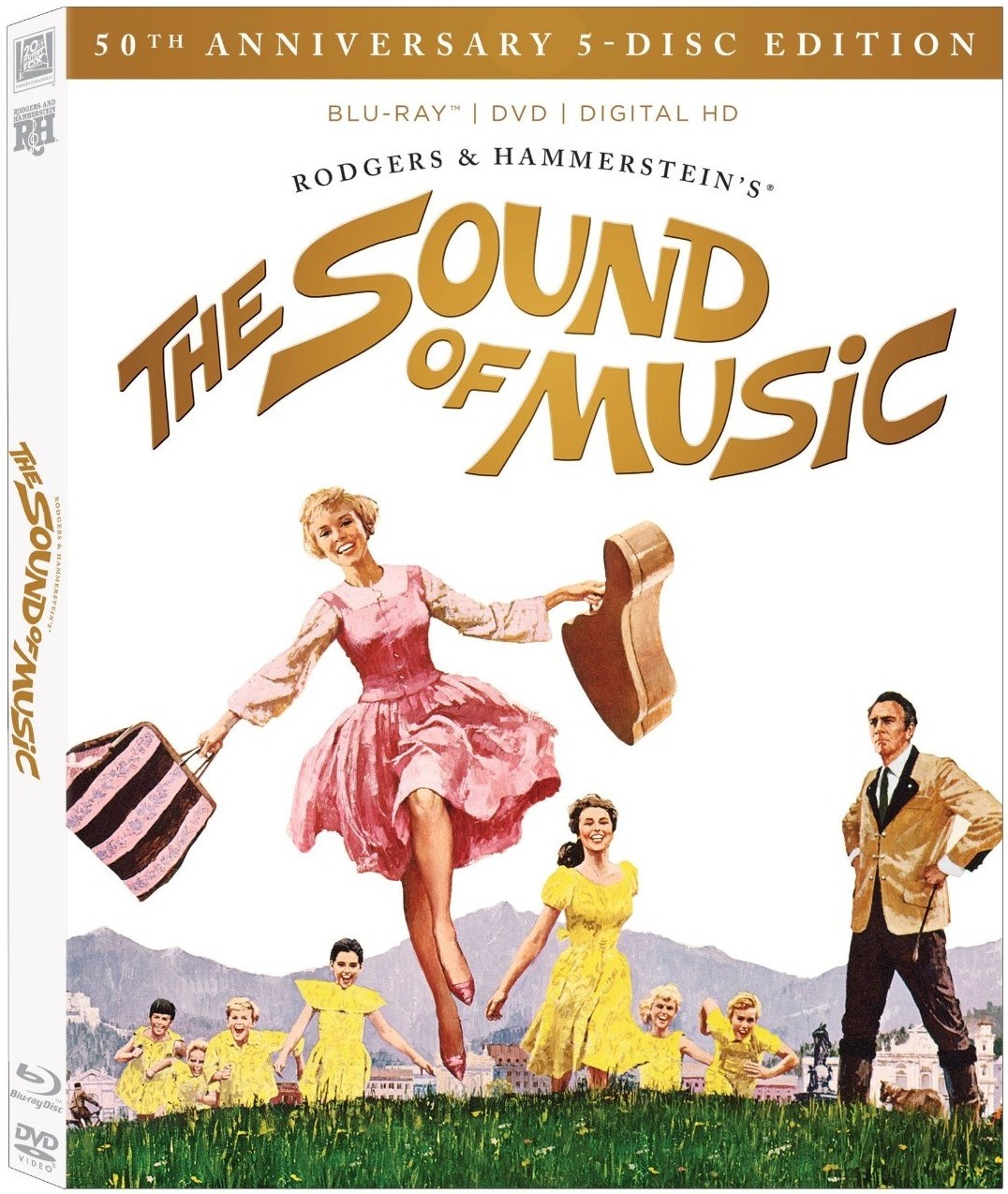 Recommended Age: 6 and up

When the independent-minded novice Maria is sent out of the convent to serve as a governess for the von Trapp family, she has no idea how many lives she will change! Captain von Trapp runs his home like a military detachment, and his children have no chance to play — or sing. And when Maria brings music into their World War II Austrian home, she captures the heart of the Captain as well as the children. This 5-disc 50th Anniversary Edition of this award-winning film is a beautiful way to introduce the story to a new generation of Mighty Girls. 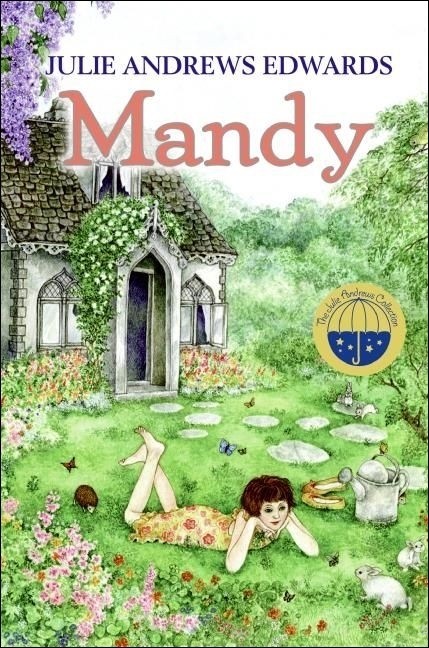 10-year-old Mandy is an orphan who wants a place to call her own more than anything in the world. So when she climbs over the orphanage wall and finds an abandoned cottage, Mandy realizes that she’s found the perfect place. Through the year, Mandy works to make the cottage hers, “borrowing” things she needs from the orphanage. But when Mandy gets sick at the cottage on a stormy night, she’ll learn that there are friends to be found in the most unexpected places! This charming novel by beloved actress Julie Andrews is sure to delight any child who’s dreamed of creating her very own secret space. 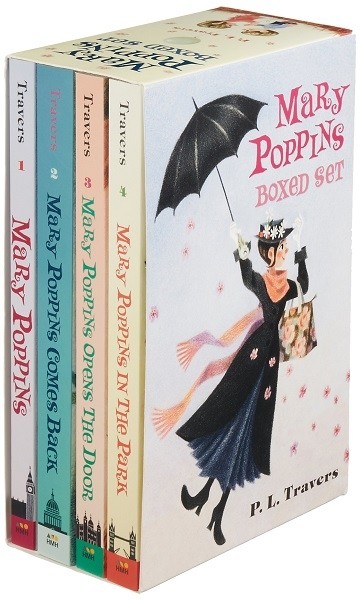 From the moment a mysterious woman appears at Number Seventeen Cherry-Tree Lane to take a position as a nanny, there's a little magic in the air! Only Mary Poppins can slide up a banister and turn a chalk drawing into a day at the park. This set collects four Mary Poppins adventures, Mary Poppins, Mary Poppins Comes Back, Mary Poppins Opens the Door, and Mary Poppins in the Park, in paperback editions, perfect for both old and new fans. For younger readers, check out the Mary Poppins picture book adaptation for ages 4 to 8. 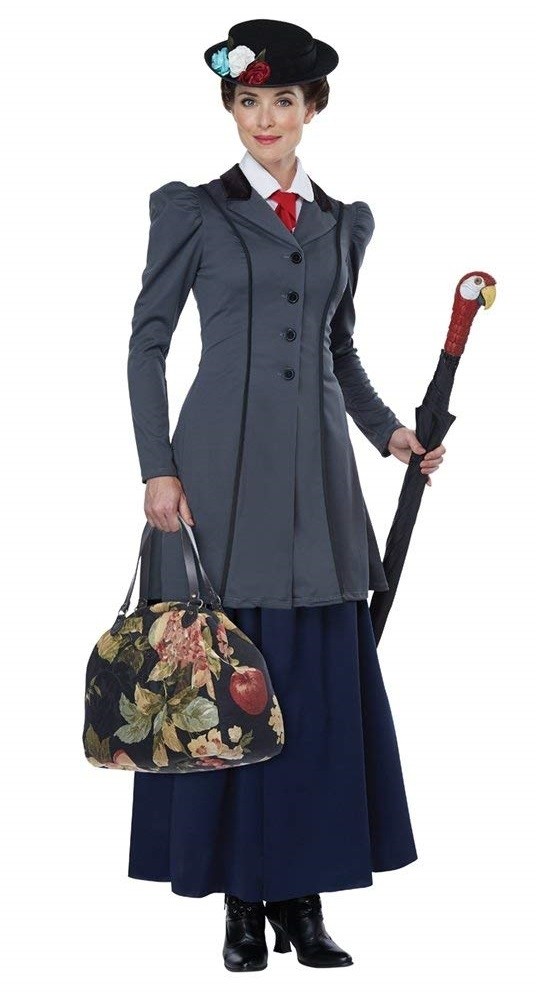 Spit-spot! You won't need a spoonful of sugar to enjoy this costume set from California Costumes, which is modeled after the look from the classic film. This 100% polyester costume set includes a jacket, a skirt, a dickey, a hat with three flowers, and a parrot handle you can attach to most umbrellas. It's the perfect choice for any Mary Poppins fan! For those who preferred Mary Poppins Returns, there is also this Mary Poppins Returns Costume for teens and adults. 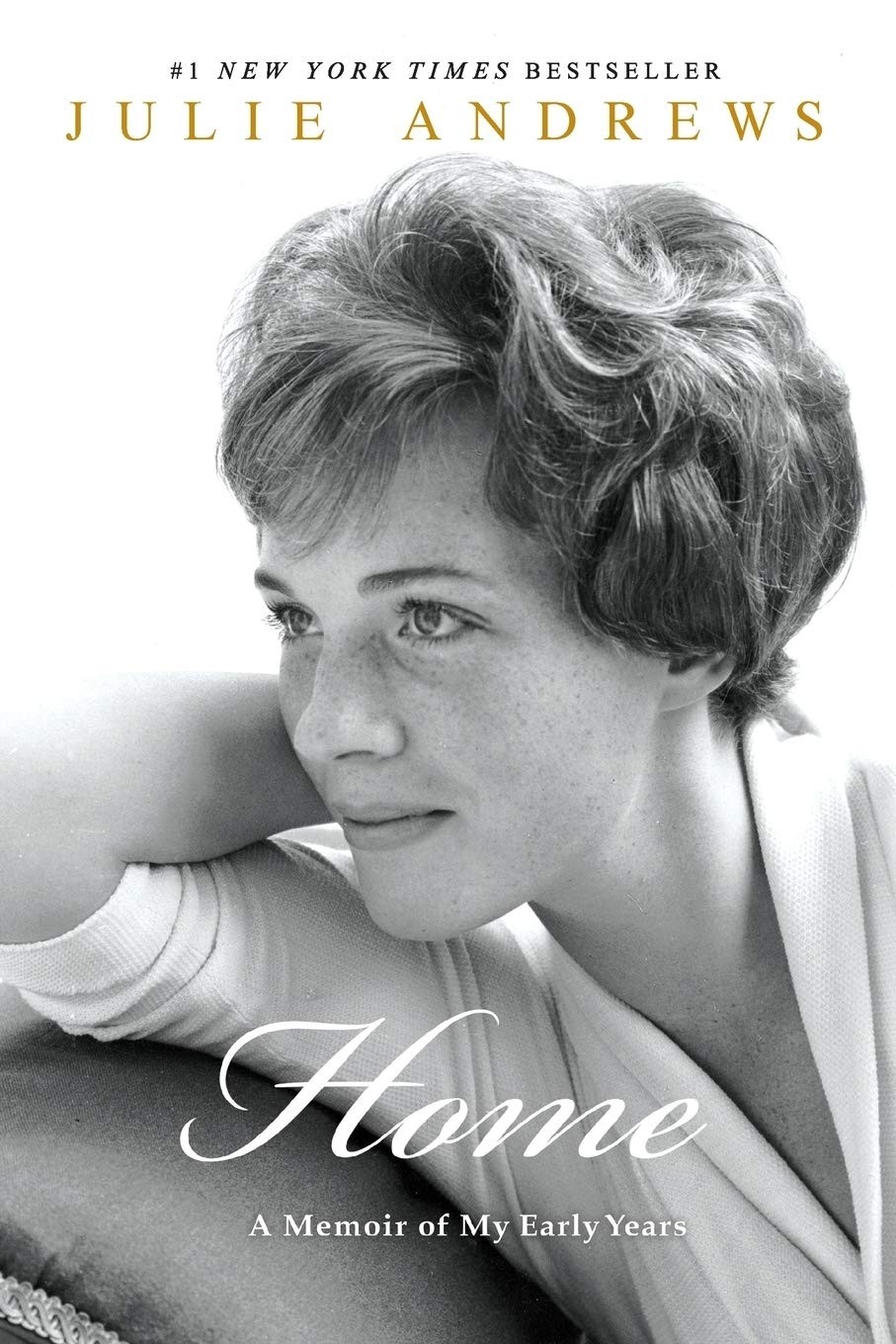 Julie Andrews has delighted audiences for decades, but there's more to her story that glamorous appearances on stage and film! In this personal memoir, Andrews tells the story of her life from her childhood with an aspiring performer mother to her big break into Hollywood when Walt Disney cast her in the role of Mary Poppins. She describes surviving national tragedies like the Blitz and personal ones like her parents' divorce; the challenges of a childhood devoted to performance; and the experience of traveling across the Atlantic at age 18 to make her Broadway debut. Packed with fascinating anecdotes and including personal photos, this is a unique look at Andrew's life guided by the beloved actress herself.

Home Work: A Memoir of My Hollywood Years 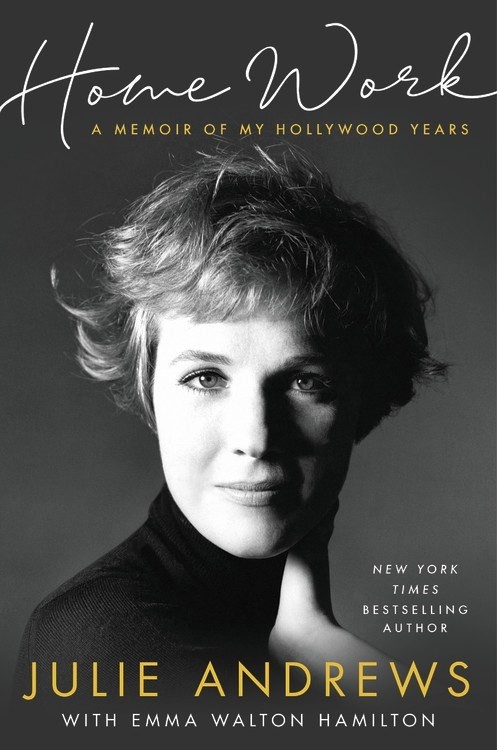 Home Work: A Memoir of My Hollywood Years

In her first memoir, Home, Julie Andrews talked about the challenges of her childhood and of her rise to become a star on the stage. Now, in the much-anticipated follow-up, she explores her time in Hollywood, complete with the highs and lows: a stunning rise to fame, adjusting to a new world, and the challenges and joys of family and love. She also provides a behind-the-scenes peek at the making of some of her most beloved films, like Mary Poppins, The Sound of Music, and Victor/Victoria. This candid and charming memoir is a unique glimpse into the inspiring and little-known life of a Hollywood treasure.