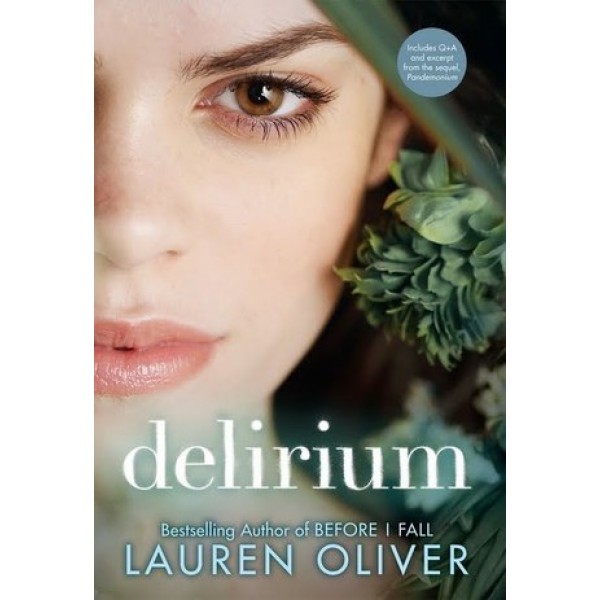 They say that the cure for Love will make me happy and safe forever. And I've always believed them. Until now. Now everything has changed. Now, I'd rather be infected with love for the tiniest sliver of a second than live a hundred years smothered by a lie.

"With the clock ticking down to her surgery, Lena is drawn into Alex’s world, one of passion and freedom, while her emotionally castrated family members hope to turn her into yet another complacent zombie. Oliver’s masterstroke is making a strong case for love as disease: the anxiety, depression, insomnia, and impulsive behavior of the smitten do smack of infirmity." -- Booklist

Delirium is followed by Pandemonium in the Delirium trilogy.

Lena Haloway is content in her safe, government-managed society. She feels (mostly) relaxed about the future in which her husband and career will be decided, and looks forward to turning 18, when she'll be cured of deliria, a.k.a. love. She tries not to think about her mother's suicide (her last words to Lena were a forbidden "I love you") or the supposed "Invalid" community made up of the uncured just beyond her Portland, Maine, border. There's no real point -- she believes her government knows how to best protect its people, and should do so at any cost.

But 95 days before her cure, Lena meets Alex, a confident and mysterious young man who makes her heart flutter and her skin turn red-hot. As their romance blossoms, Lena begins to doubt the intentions of those in power, and fears that her world will turn gray should she submit to the procedure. In this powerful and beautifully written novel, Lauren Oliver, the bestselling author of Before I Fall, throws readers into a tightly controlled society where options don't exist, and shows not only the lengths one will go for a chance at freedom, but also the true meaning of sacrifice. -- Jessica Schein