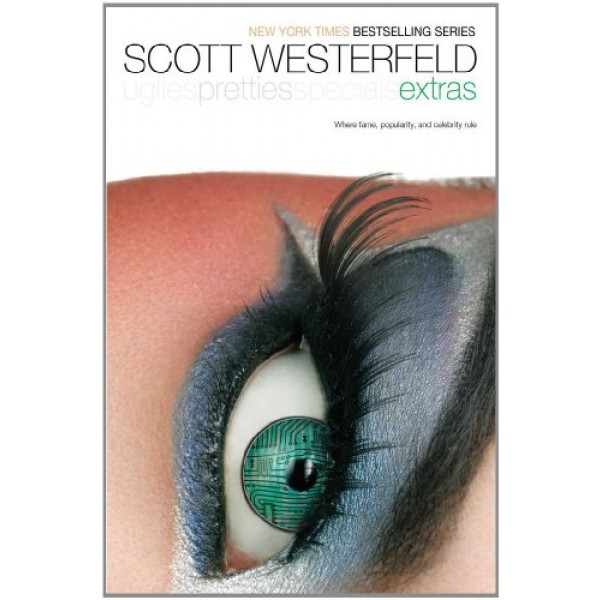 Extras, the final book in the Uglies series, is set a couple of years after the "mind-rain," a few earth-shattering months in which the whole world woke up. The cure has spread from city to city, and the pretty regime that kept humanity in a state of bubbleheadedness has ended. Boundless human creativity, new technologies, and old dangers have been unleashed upon the world. Culture is splintering, the cities becoming radically different from each other as each makes its own way into this strange and unpredictable future . . .

One of the features of the new world is that everyone has a "feed," which is basically their own blog/myspace/tv channel. The ratings of your feed (combined with how much the city interface overhears people talking about you) determines your social status -- so everyone knows at all times how famous they are.

As Scott Westerfeld explored the themes of extreme beauty in the first three Uglies books, now he takes on the world's obsession with fame and popularity. And how anyone can be an instant celebrity.

The Uglies series began with Uglies, Pretties, and Specials.

"Several years after the massive paradigm shift of Specials (2005), 15-year-old Asa Fuse investigates an urgent news story in hopes of boosting her public name recognition — of crucial importance in the celebrity-based system that has replaced Prettytime’s cult of boring, brainless beauty. Asa draws the attention of the story’s possibly dangerous subjects as well as that of Tally Youngblood, now a legendary figure. As usual, Westerfeld excels at creating a futuristic pop culture that feels thrillingly plausible..." --Jennifer Mattson, Booklist