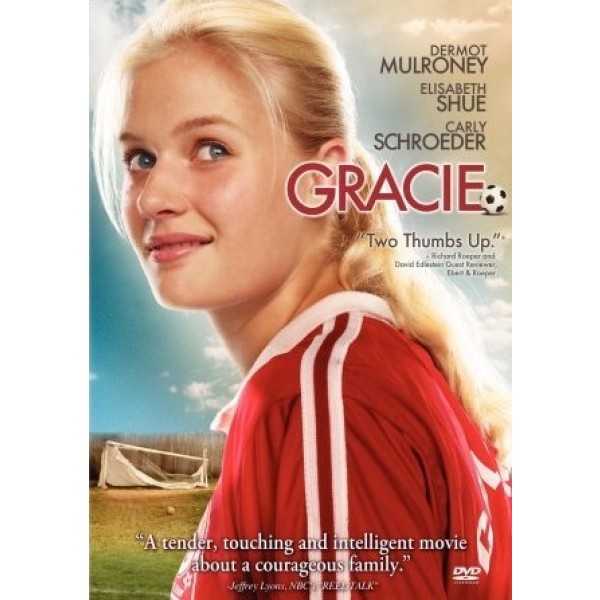 Meet Gracie Bowen, she's your average, ordinary 15-year-old girl, except for one thing: she's determined to play varsity soccer... on the boys' team! But when her school forbids her to play and even her family questions her ability, Gracie sets out on extraordinary quest to prove them all wrong.

Fighting to change the school's policy and facing off against some of the toughest competitors on the soccer field, Gracie must summon all of her strength and courage, to finally show the world that a girl with a dream can do absolutely anything!

Both on-screen and off, Gracie is an inspiring family affair that turns real-life tragedy into a spirited tale of fortitude. With former Melrose Place star Andrew Shue serving as producer and playing a supporting role, and his actress sister Elisabeth Shue (Leaving Las Vegas) in a supporting role, this modest, $10 million independent production was directed by Elisabeth Shue's husband, TV veteran Davis Guggenheim (director of Al Gore's global-warming documentary An Inconvenient Truth), and loosely inspired by the death of the Shues' brother, Will.

Elisabeth Shue's successful late-1970s campaign to replace her late brother on his high school soccer team serves as the basis for this appealing, no-frills drama about Gracie Bowen (Carly Schroeder), an athletic New Jersey teenager whose soccer-star brother is killed in a car accident. Against the wishes of her initially unsupportive parents (Dermot Mulroney, Elisabeth Shue), she pays tribute to her brother by pursuing his place on her high school's boy's soccer team. The year is 1978 (with Boston's "Don't Look Back" and other '70s hits on the soundtrack), and girls' soccer doesn't yet exist in American high schools, but Gracie's determination pays off, and without attempting to reinvent the wheel, Gracie emerges as a satisfying, emotionally authentic story of personal perseverance. In a role that all teenage girls will relate to, Schroeder (a seasoned child-star veteran of soap operas and sitcoms) gives a quietly forceful performance that's sure to boost her Hollywood profile, and the fine supporting cast and a sensibly-written screenplay keep Gracie from becoming the maudlin tear-jerker it might have been.

Gracie isn't a great film by any means, but for all its familial heart and soul, it deserves to be called a winner. -- Jeff Shannon