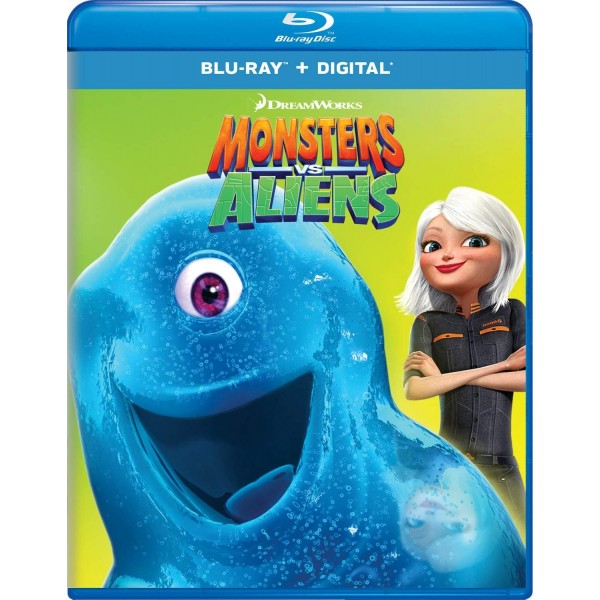 When Susan Murphy is unexpectedly clobbered by a meteor full of outer space gunk, she mysteriously grows to 49-feet-11-inches tall and is instantly labeled a "Monster" named Ginormica. The military jumps into action, and she is captured and held in a secret government compound filled with other "monsters" like herself. This ragtag group consists of the brilliant but insect-headed Dr. Cockroach, P.H.D.; the macho half-Ape-half-fish The Missing Link; the gelatinous and indestructible B.O.B.; and the 350-foot grub called Insectosaurus.

Their confinement time is cut short however, when a mysterious alien robot lands on Earth and the motley crew of Monsters is called into action to save the world from imminent destruction.

Monsters don't exist, right? If they did, they'd be locked up in some secret government location so the general population wouldn't know of their existence. But what if monsters do exist... and they aren't evil, or even particularly scary? What if they're funny... and smart... and what if they might just be the key to man's survival? When a meteorite crashes in California on Susan Murphy's (Reese Witherspoon) wedding day, Susan is struck by a dose of otherworldly quantonium, her bridal glow becomes decidedly green, and she suddenly swells to a gargantuan 49 feet-11 inches tall.

The Feds swoop in and whisk her away from husband-to-be Derek (Paul Rudd) to a government concealment agency where they dub her Ginormica and leave her to bemoan her losses and spend the rest of her days with strange creatures like B.O.B., the brainless blob (Seth Rogen), mad professor Dr. Cockroach (Hugh Laurie), the half-fish and half-ape Missing Link (Will Arnett), and the overly huge and strangely silent grub Insectosaurus.

Next, Gallaxhar (Rainn Wilson), ruler of an alien civilization, sends a huge robot to attack Modesto, Calif., to recover the quantonium released by the fallen meteorite. Under the ineffective leadership of President Hathaway (Stephen Colbert), the government embraces General W. R. Monger's (Kiefer Sutherland) suggestion to pit the imprisoned monsters against the robot in exchange for their freedom. The monsters are no match for the robot until Susan begins to really believe in her own abilities and embrace the power of her friendship with the other monsters. B.O.B is absolutely hilarious with his consistent propensity for misunderstanding, indiscriminate digestion of anything and everything in his path, and witless adoration of his fellow monsters.

The crazy exploits of Dr. Cockroach inspire lots of laughter, Insectosaurus proves his worth in the end, and Ginormica serves as the glue that holds the whole film together. The InTru 3-D format is highly effective and if you like animation; visual, verbal, and action comedy; references to past science-fiction films; and lovable monsters; you'll enjoy Monsters vs. Aliens. -- Tami Horiuchi