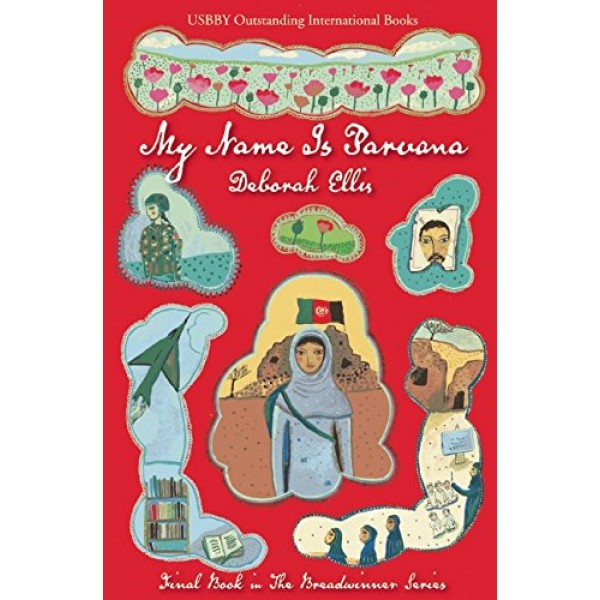 My Name Is Parvana

On a military base in post-Taliban Afghanistan, American authorities have just imprisoned a teenaged girl found in a bombed-out school. The army major thinks she may be a terrorist working with the Taliban.... The only clue to her identity is a tattered shoulder bag containing papers that refer to people named Shauzia, Nooria, Leila, Asif, Hassan -- and Parvana.

In this long-awaited sequel to The Breadwinner Trilogy, Parvana is now fifteen years old. As she waits for foreign military forces to determine her fate, she remembers the past four years of her life. Reunited with her mother and sisters, she has been living in a village where her mother has finally managed to open a school for girls. But even though the Taliban has been driven from the government, the country is still at war, and many continue to view the education and freedom of girls and women with suspicion and fear.

"This passionate volume stands on its own, though readers new to the series and to Ellis' overall body of work will want to read every one of her fine, important novels. Readers will learn much about the war in Afghanistan even as they cheer on this feisty protagonist." -- Kirkus

"This sequel to the series is not merely an important book about the difficulty of girls' lives in war-torn, U.S.-occupied Afghanistan. It is also an example of vivid storytelling with a visceral sense of place, loss, distrust, and hope.... Why Parvana remains silent in U.S. custody will be difficult for many young readers to understand, but Ellis makes it easy to immerse oneself in this very foreign place, where hope thrives despite explosions and abused child brides and stonings. A must-buy title." -- School Library Journal