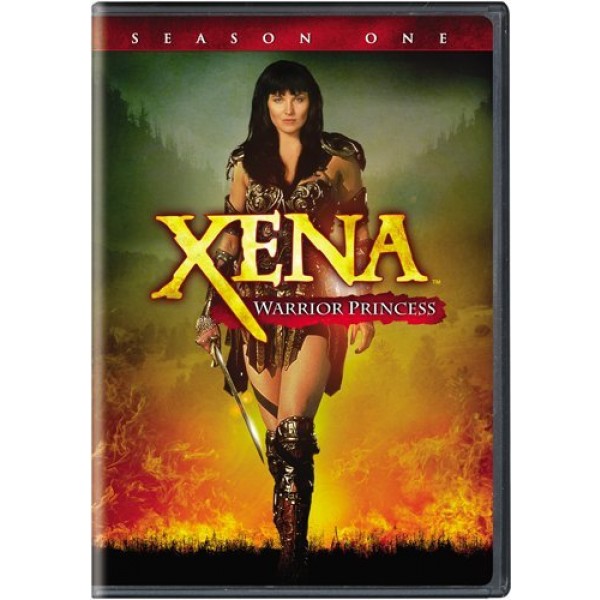 Make way for one of the fiercest and most dynamic woman warriors to ever grace the TV screen as all 24 Season One episodes of Xena: Warrior Princess come to DVD. Lucy Lawless is Xena: a smart, tough, and fearless fighter who travels the dangerous roads of Ancient Greece defending the innocent from the forces of darkness and seeking redemption for her cruel misdeeds of the past. Along for the adventures is her devoted friend Gabrielle, a compassionate girl who hopes to be a warrior one day, and other legendary figures, including the formidable Hercules. Combining impressive displays of mythology, fantasy, and martial arts, it's an iconic show that set the bar for all female action heroes.

Just four minutes into "Sins of the Past," the first episode of Xena, you'll gladly follow the warrior princess anywhere. Taking on a gang of marauders, she leaps onto an upright spear embedded in the ground and, with a cry of "Ai-yi-yi-yi-yi," does a circular wall of death on their chests. A syndication phenomenon, this audacious 1995 series was a spin-off from Hercules: The Legendary Journeys. Lucy Lawless stars as Xena, dressed to kill in leather and breastplate. Her exploits are legend: "She came down out of the sky in a chariot throwing thunderbolts and breathing fire," remarks one awestruck boy in the first episode. Xena wants to bury her violent past, but there is no rest for the formerly wicked as she takes up arms (and feet) against any number of villains and mythological beasts. She is joined by Gabrielle (Renee O'Connor), a young peasant woman who "is not cut out for this village life," and runs away from home to join Xena in her adventures.

As the series evolved, speculation was rife about the true nature of their relationship. Playful and provocative teasers in several of these episodes give this first season an unexpected erotic charge, as witness "Altared States," in which the two skinnydip, and later, a drugged Gabrielle, revived by Xena, looks upon her and gushes, "By the gods! You are beautiful." Other memorable episodes include "Callisto," which introduces the vengeful female warrior who would further bedevil Xena in seasons to come; "Prometheus," in which Kevin Sorbo guest stars as Hercules; "Chariots of War," in which Xena wears a dress (!), and "Warrior...Princess," in which Xena trades places with her look-alike, a Princess named--yes--Diana, who is the target of assassins. By the gods, Xena is an absolute hoot whose pleasures--stylized action sequences, cheesy special effects, tongue-in-cheek anachronistic dialogue--are anything but guilty ones. Clumsy packaging, lack of commentary, and less than pristine picture quality are minor drawbacks to this otherwise thrilling set. --Donald Liebenson