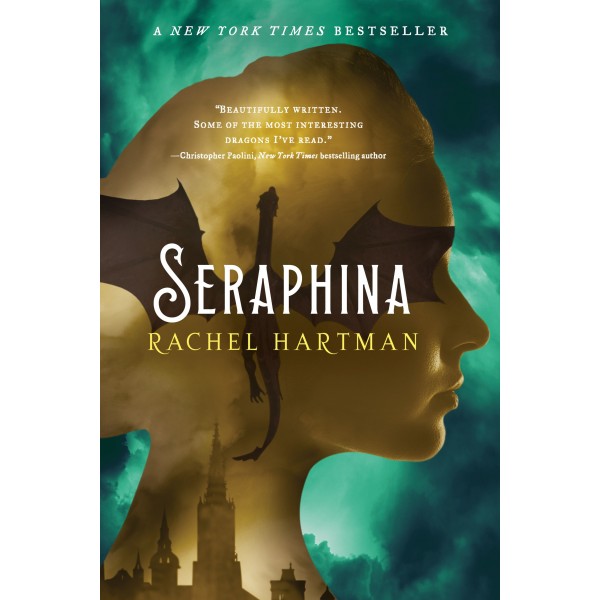 In her New York Times bestselling debut, Rachel Hartman introduces mathematical dragons in an alternative-medieval world to fantasy and science-fiction readers of all ages.

Four decades of peace have done little to ease the mistrust between humans and dragons in the kingdom of Goredd. Folding themselves into human shape, dragons attend court as ambassadors, and lend their rational, mathematical minds to universities as scholars and teachers. As the treaty's anniversary draws near, however, tensions are high.

Seraphina Dombegh has reason to fear both sides. An unusually gifted musician, she joins the court just as a member of the royal family is murdered -- in suspiciously draconian fashion. Seraphina is drawn into the investigation.... While they begin to uncover hints of a sinister plot to destroy the peace, Seraphina struggles to protect her own secret, the secret behind her musical gift, one so terrible that its discovery could mean her very life.

Amazon Best Teen Book of the Month, July 2012: In Seraphina, dragons and humans maintain an uneasy peace and for a woman who is both there is nowhere to turn for acceptance -- not even within herself. Seraphina has spent her young life concealing the truth of her parentage and authentic nature, a task that proves ever more difficult when she is thrust into the spotlight of the royal court. Author Rachel Hartman's dragons take human form but shun the messiness of human emotion by remaining "in ard" (a highly rational state of mind), while their counterparts cling to a dangerous assumption of species superiority.

As the anniversary of the treaty between the two sides approaches, court intrigue reaches a fever pitch and hard-won truths, betrayals, and intricacies of the heart are laid bare. Seraphina is a beautifully complex fantasy that delves into the most basic of desires -- to be loved, to belong, and to find peace in self-acceptance. --Seira Wilson