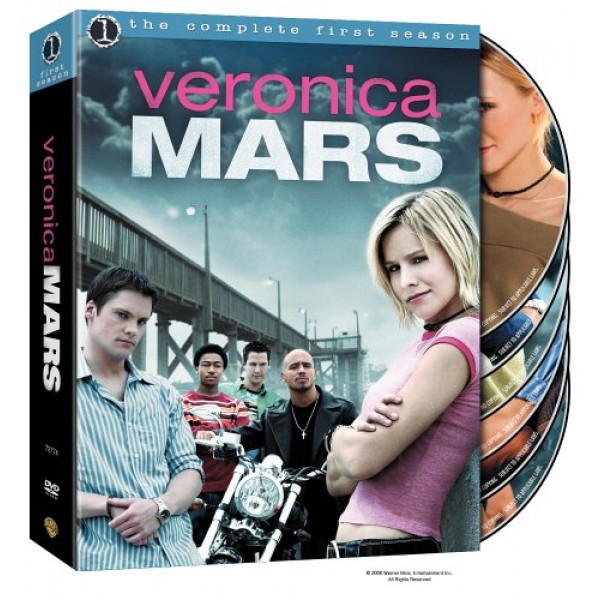 In the wealthy, seaside community of Neptune, California, the rich and powerful make the rules. Unfortunately for them, there's Veronica Mars, a smart, fearless 17-year-old apprentice private investigator dedicated to solving the town's toughest mysteries. Veronica used to be one of the popular girls, but it all came crumbling down around her after her best friend, Lilly, was murdered, and her then-sheriff father, Keith, was removed from office for naming Lilly's rich father as the lead suspect.

During the day, Veronica must negotiate high school like any average teenage girl. But at night, she helps with her father's struggling, new private investigator business -- and what she finds may tear the town of Neptune apart at the seams.

The smartest high school drama since Buffy the Vampire Slayer, Veronica Mars is The O.C. as penned by Raymond Chandler. Veronica (Kristen Bell, Deadwood) is Nancy Drew by way of Lauren Bacall, while Neptune makes Peyton Place look like Mayberry. The first season begins in the aftermath of a dizzying array of cataclysmic events: Her best friend, Lilly (Amanda Seyfried), was murdered, her sheriff father was fired over his handling of the case, she was sexually assaulted, and her mother left. Since then, Keith Mars (Enrico Colantoni, Just Shoot Me) has become a private eye and drafted Veronica as his assistant. She may lack Buffy's physical prowess, but the "tiny blonde one" turns out to have a special talent for sleuthing. In the wake of her sophomore year, the popular crowd abandoned Veronica--even boyfriend Duncan (Teddy Dunn), Lilly's brother. (Hence the theme song: "We Used to Be Friends.")

Veronica is on her own until she meets Wallace (Percy Daggs III), the only student unfamiliar with her past, unlike Duncan's sarcastic pal, Logan (Jason Dohring), one of her more ardent foes. He was Lilly's boyfriend and his father is movie star Aaron Echolls (Harry Hamlin). By the end of her junior year, Veronica and Logan will make their peace, but it won't be so easy to win over the school--let alone the town. Throughout the season, Veronica will solve several mysteries both big and small--including the murder of Lilly Kane. But a few questions remain. For instance, at the end of the season finale, Veronica opens the door to greet an unseen visitor with "I was hoping it would be you." So who was it? Fortunately, UPN renewed the critically acclaimed (if ratings challenged) teen noir and that tantalizing question will be answered in the second season premiere. -- Kathleen C. Fennessy